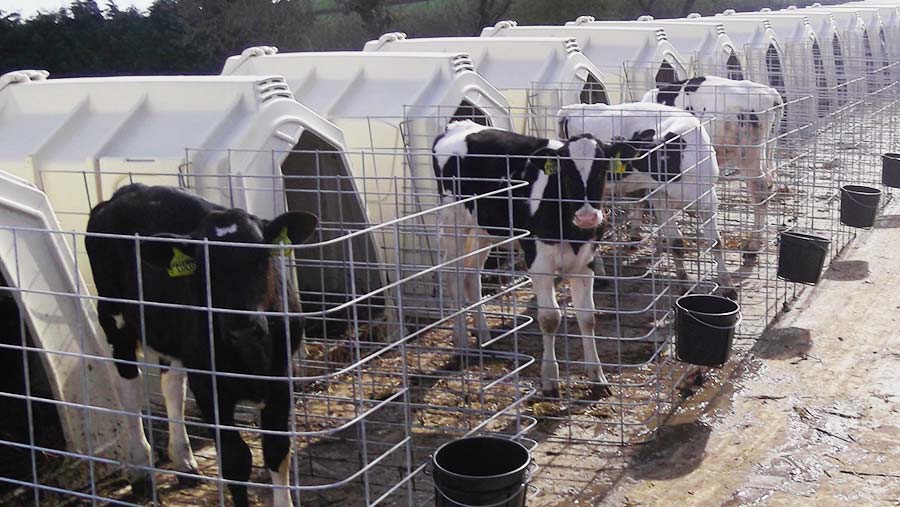 At a time when the continual drive for efficient production still appears insufficient to plug the hole in global market prices, farmers must do more to protect against this instability.

Contract finishing with a consistent throughput is just one way farmers are safeguarding against these global forces. And key to the success of this approach is a clear focus on what the processor and, ultimately, the consumer wants – be that tender beef, traceability or both.

Neil and Deidre Welburn market 600 black-and-white bulls a year on their 240ha farm in Balne, North Yorkshire, with their son Chris and daughter Claire.

Buying in young calves gives the family maximum control over the intensive rearing and finishing process. However, it is their buyer, Adam Buitelaar, who offers peace of mind with his underwritten finished price, provided the animals are within spec.

“Adam has a guaranteed market for his cattle through OSI-McDonalds. As one of his first customers six years ago, we started on 235p/kg. We are now on 290p/kg and prices did peak at 320p/kg.

“When times were tough we were protected, but when times were good, we didn’t really feel that either. We just know we are secure and we’ve always been happy with the price,” says Mr Welburn.

Sending away about 50 bulls a month, at an average age of 13 months for £650-660, Mr Welburn says the margins aren’t brilliant, but at least he’s still making money – about £80 a head profit.

The underwritten price on a Buitelaar beef contract is guaranteed for animals graded P+2 or better and weighing more than 200kg deadweight.

“Our grid really is harder to miss than hit,” says Mr Buitelaar, whose company even takes out of spec animals.

If the Welburn’s animals are graded P1, they receive 30p/kg less. For any at P-1, of which there are very few – these were usually sick as calves – there is a 70p/kg reduction.

Each animal is insured too, so farmers will get paid even if a condemned carcass is in spec.

Mr Buitelaar believes his business gives farmers control of their farming system. When the calves arrive on farm and the finished price is agreed,  this sustainability allows the farmer to decide how best to rear them.

“I worry about farmers buying in cattle without any future plans. With costs increasing so much in the past 10 years, farming has to be seen as a business and there is nowhere to hide for people who do not see it as such.”

Mr Welburn believes it’s important for animals to be reared and finished on the same farm so they’re not carried around the country. So calves are bought in aged two to four weeks and given 1.5ml of tulathromycin and 6ml of multivitamins as they are unloaded. Two to three days later they receive an intranasal vaccine against pneumonia.

Mr Welburn says he is not selective when buying calves and will take all available, as he knows there will be no problem selling them. Working with Buitelaar, calf supplier Andrew Hall of Albert Hall Farms sources most of the 50-60 black-and-whites that arrive each month.

Kill sheet data logged on the computer has been vital to see which calves have performed better. And reviewing this information has helped when agreeing calf prices, says Mr Welburn.

“One farmer wanted more money for the calves, but we refused, and these ended up being some of the best, so we’ve gone back to him to renegotiate.”

As the calves have not come from Buitelaar calf collection centres, any farms supplying calves must be approved and the calves registered with the company within three months after birth.

Cross Hill Farm can house a maximum of 120 calves, but Mr Welburn admits as the business has developed, it can be difficult to cope with autumn and spring calving peaks. Future plans include modifying existing buildings to handle the higher numbers available at these times.

Housed in pens of five, calves are fed using Wydale calf feeders with 20% milk powder twice a day. Cared for by Mr Welburn’s wife Deidre and daughter Claire, they have recently cut weaning from 10 to eight weeks old where possible, depending on their condition. Costs to weaning at 10 weeks were £128 a head, including injections and milk powder.

“As they’re fed two litres of 20% morning and night, this should lead to significant cost savings,” says Mrs Welburn.

They spend the next 12-14 weeks on a 16% protein coarse mix before switching straight to the finisher ration, where son Chris takes over.

Other arable and contracting enterprises  mean cattle are fed once a day, so it’s important to keep food in front of them 23.5 hours a day.

“The ration contains six different feeds, all broken down at different rates to keep them fuller for longer. Crucially we are feeding the animal for what the purchaser wants – a lighter carcass with tender beef.

“It is a high-powered ration to get them finished quickly and both the producer and purchaser are pleased with the results,” says Mrs Clarke.

It is also important to boost calcium levels to ensure a strong bone framework can carry the weight as the cattle are pushed hard, adds Mrs Clarke.

Ration details a head a day

Consistency of ingredients is important to avoid fluctuations in the rumen and checks in growth. Key to success is getting the diet right to start with, says Mrs Clarke.

“I came in and balanced the diet out, feeding with what they’ve got in front of them. If ingredients run out it’s important to rebalance.”

Feed costs are £62/t and an average of 3.75t is needed to finish each animal.

The Welburns have recently invested in a refurbished Keenan mixer wagon for £17,000. The ration devised by Mrs Clarke is entered into the Pace control box, which tells the operator exactly in what order and how much of each ingredient is needed.

There is also traceability as everything put into the feeder is logged. This is vital for the processor, OSI-McDonalds, which wants a fully traceable product from farm to fork.

The cattle are weighed one month before going and on the day of loading. If they are more than 400kg liveweight, they are good to go.

In future, Mrs Clarke advises more weighing and monitoring throughout the rearing process.

“Like so many farmers do, weighing cattle just before they go is too late. Monitoring all the way through is crucial – with dairy you can see the difference the next day in the tank. With beef, when they’re on the hook, it’s too late.”