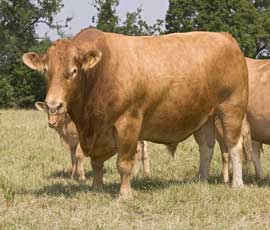 From St Ervan near Wadebridge in Cornwall, Mr Clemens has been a keen South Devon enthusiast for many years and his Penrose Stonehedging herd has won many distinguished awards at shows both locally and nationally.

The breed secretary, Caroline Poultney, reported another sound financial year in 2010, with an increase in registration income of 11% representing 4170 animals registered as pedigree. Similarly membership increased to reach a total of 781, a 28% increase in just eight years.

In addition to the positive net movement in funds of £46,656, the society gave back to its members £2100 during the year to herds belonging to health schemes, and £6300 for animals registered as pedigree but not ultimately retained for breeding.

Retiring chairman James Eustice, also from Wadebridge, said “This continuing expansion of our society is enabling us to reinvest to promote and develop the breed, and to open up more commercial outlets.” He said that the South Devon breed is numerically the third largest native beef breed, and continuing to grow.

The incoming chairman is Malcolm Broome from Market Harborough in Leicestershire, whose Welland Valley herd has enjoyed much success in sale and show rings over recent years.

Immediately following the AGM Mr John Wakeham from Kivells Auctioneers conducted a very successful Auction of Promises, which raised £5200 from members’ gifts and donations. Proceeds from the auction will go towards the publication of a book of South Devon history and memorabilia being compiled by Colin Pearse from Barramoor, North Bovey.