Tightening supplies and increasing prices in the beef and sheep sectors were the main messages to attendees at the Royal Smithfield Christmas Fair last week.

Speaking at the Farmers Weekly/EBLEX-sponsored seminars EBLEX’s Phil Hadley said the much-needed 25% rise in beef prices was where it needed to be, although there might be some easing back post-Christmas.

But with beef and dairy herds reducing by 3% a year, the young bull beef sector down by 12% and prime beef down by 6%, the UK is now in a beef deficit, said Dr Hadley.

“The retail demand for beef is putting the sector at a possible risk,” he said. “Retail sales of beef are down 2.6% with consumers trading down and swapping proteins. And although retail mince sales have increased by 6%, steaks are down by 10% and joints by 24%,” he added.

However, Dr Hadley assured those gathered that GB production was in line with EU and worldwide production. “The EU deficit also means there is opportunity to export high-quality beef at a premium,” he said.

Steven Feehan of Anglo Beef Processors also emphasised the volatility seen in the beef sector during 2008. “The rise in prices means this is the first year farmers can see there is a future. But because of the increase demand in forequarter meat, we may see mince being sold at a higher price in the coming year and a decrease in hindquarter price to equal sales all beef products,” he said.

But despite the credit crunch, Taste of the West‘s John Sheaves reckoned consumers were still buying added value products. “Although price is more important, ethical shopping is not about to collapse,” he said.

“Ethical shopping is firmly established in the UK and it is not always expensive. Looking at sales of Aldi and Lidl you will see they have increased premium lines to their market,” he said.

For the sheep sector, the overall picture is the same as in beef, with a 3% decline in the breeding flock each year, said Dr Hadley.

But despite this, lamb prices are likely to hold post-Christmas because of the strong export market, aided by a 26% reduction in New Zealand lamb supply, said Dr Hadley. “By the coming season NZ lamb supplies will be down by 6m because about 70% of sheep producers have converted to dairy,” he said. 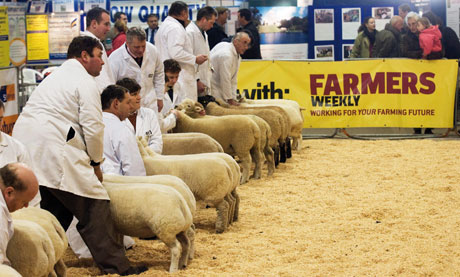 Prime sheep and cattle may have been on show at last week’s Royal Smithfield Christmas Fair, but many producers need to make more effort to meet abattoir specification, visitors were told

“There are implications for all when a lamb falls outside target spec. For Dalehead Foods, the supply to Waitrose is jeopardised the return to the producers is reduced and the efficiency of the abattoir is reduced,” she said.