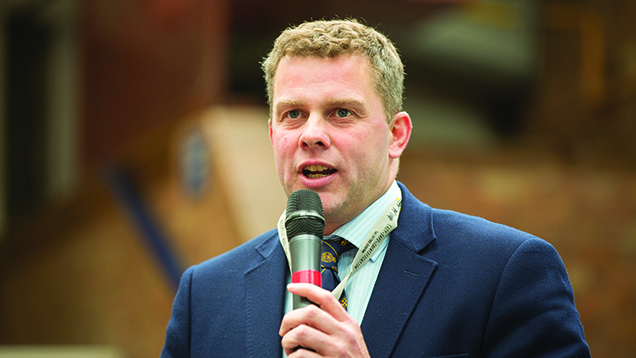 The introduction of video image analysis (VIA) will incentivise beef farmers to produce what their customers want because the current Europ grid for grading beef cattle is no longer fit for purpose.

That’s according to Perthshire beef producer Adrian Ivory, who believes VIA grading heralds an exciting time for the beef sector.

“There’s no need for massive numbers of out-of-spec carcasses. An in-spec strip-loin is worth about £16/kg compared with an out-of -pec strip-loin at £5/kg.

“At the moment producers aren’t penalised for that, but in the future I believe they will be.”

Speaking at the Beef Expo event in York last week, Mr Ivory explained why he preferred the VIA system over conventional grading.

“Every single carcass that’s graded using VIA has an image taken and that image is stored should it need to be referred back to.

“And if the VIA machine fails there is always a manual grader on the slaughter line,” said Mr Ivory, the 2008 Farmers Weekly Awards Farmer of the Year.

He told the National Beef Association’s event that he’d eventually like to see VIA grading instigate a system where beef farmers were paid on the yield of meat from the carcass.

“This would make the Europ grid completely irrelevant.

“No longer would you hear people say an animal was an E grade or a U grade.

“In the future it should be all about the yield of meat and it’s the VIA system that will incentivise farmers to produce the beef the consumer wants.”

Mr Ivory is chairman of the Scottish Suckler Strategy Group and said a trial was being planned by the group to look at the payment of finished cattle based solely on meat yield.

“That information will enable us to start producing what our customers want, but as an industry we need to ask who are our actual customers?

“Are they the processors, the store cattle buyers or the supermarkets?

“And if yours are the store cattle buyers, I wonder if you have ever asked them how those cattle performed? And yet producers still expect buyers to continue to buy them.

“Farmers have to ask their customers what they want. At the moment we expect them to take whatever is produced.”
Adrian Ivory, beef producer

“How can beef businesses improve if you don’t have this feedback of information?” asked Mr Ivory.

“Farmers have to ask their customers what they want. At the moment we expect them to take whatever is produced.”

When Mr Ivory asked the audience about their preferences for beef cuts it was the fillet and rib-eye that came out on top, followed by sirloin, topside and silverside.

“And yet bull buyers want a sire with big back-ends – even though that’s where all the silverside and topside cuts come from.

“So bulls are not being bought with what you or your customer wants, but are bought on what the farmer likes to look at.”

Mr Ivory said consumer habits were changing and there was a move back to buying quality rather than quantity.

“As farmers we need to be aware of this and VIA has the ability to provide us with the incentive to produce the beef that’s wanted.

“In my own herd I’m looking for cattle with length, carrying good fat cover, with a good wide top but not a huge back-side. I want them to be fast growing, but crucially not too fast because the really fast growing cattle don’t lay down enough fat.”

“Beef businesses need to be ready.

“We need to be customer friendly and produce what they want and not what we like to look at.

“The processors and the supermarkets need to be clear about what they want to reward producers for, because at the moment they are still rewarding farmers for cattle that aren’t wanted.”