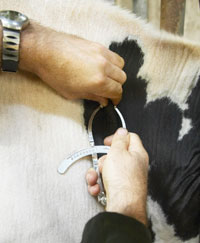 The Welsh Assembly has launched a consultation on the bovine tuberculosis compensation system to encourage farmers to comply with best practice.

Rural affairs minister Elin Jones said: “The consultation puts forward a number of options relating to areas such as overdue testing, the linking of compensation payments to good practice and risk management.

“The Welsh Assembly government is currently obliged to pay compensation for cattle removed as part of TB eradication activities in Wales, irrespective of herd owners’ actions, which can have both positive and negative impact on disease control,” said Ms Jones.

“The role of the farming industry in this is crucial. I have said all along that action by government alone will not eradicate bovine TB. Only through working in partnership over a sustained period will we have an impact on reducing the incidence of the disease,” she said.

Ms Jones added that the proposals also aimed to give a fairer deal to taxpayers, who spent almost £18m in compensation between April 2008 and 13 January this year. During the same period last year compensation totalled £11m.

Copies of the consultation document are available on request by emailing the Assembly assembly-publications@wales.gsi.uk.

The consultation closes on 10 April.