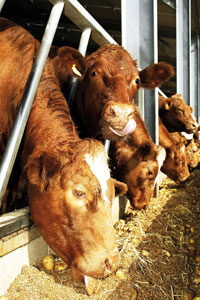 While finished beef prices could average 350p before the end of the year, producers would need to become more technically efficient if they wanted to stay in business, he said.

Despite the challenges, Mr Forster told a meeting organised by Hybu Cig Cymru (Meat Promotion Wales) , under Farming Connect’s Red Meat Development Programme, that he was upbeat about prospects for the UK beef industry.

Lower home production, the weakness of sterling against the euro and increased world demand were all combining to increase the price of slaughter cattle.

“I think domestic supplies could drop from 17% to 19% from this autumn because there is less dairy beef coming through,” he added.

Supermarket beef was 20-25% dearer than this time last year, with consumers spending at least £4m more each week on their beef than they were a year ago, he said.

The increased income helped to compensate for the loss of single farm payment.

But to survive, Welsh farmers would have to improve their businesses by becoming more technically efficient and cutting costs.

Mr Forster estimated that in the last financial year both breeders and finishers lost £250-400 an animal once the single farm payment, family labour, notional rents and interest payments were taken into account.

It meant that while market incomes could rise if average deadweight slaughter cattle prices moved up to 350p/kg, successful farmers would still have to improve efficiencies and cut costs.

“Producers should also use better bred bulls and establish regular disease monitoring programmes with their vets,” he added.

“Finishing cattle should be fed hard and fast, finished before 20 months and sold more carefully so they earned the best possible price.”