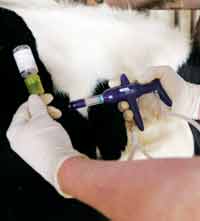 Great Britain will be officially reclassified as bluetongue free from 5 July 2011, after two years without a case of the disease.

The move means that restrictions on exporting sheep and cattle from Great Britain will be lifted.

Bluetongue-free status will mean that animals exported from Great Britain to bluetongue free countries, mainly the Republic of Ireland, won’t require vaccination, or need to meet any other bluetongue requirements.

However, it also means farmers will not be allowed to vaccinate their stock against the disease after 5 July.

Farm minister Jim Mr Paice said: “This is great news for farmers – and it’s an achievement by farmers too. This is the result of a strong and successful partnership between government, farmers and vets to eradicate this serious disease.

“There have been no new cases of bluetongue in Britain for two years, but farmers and vets need to remain vigilant and continue to be careful of animals they import.”

It had been hoped that Great Britain could move to BTV free status but still retain the option to vaccinate were the disease risk status to change. But under EU law, once a country is declared bluetongue free, livestock keepers are no longer able to vaccinate.

The government has said it is pressing for changes to be made at European level to allow farmers to use vaccination even when bluetongue zones are not in place.

A testing system will be maintained for animals imported into the country from high-risk countries.