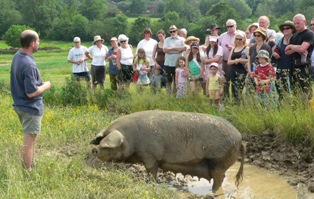 Pig producers wishing to take part inOpen Farm Sunday but are worried about biosecurity could make it possible by taking part in a buddy system.

BPEX, who is one of this year’s sponsors of the event, to be held on Sunday, 17 June, said anybody looking to open their farm could be assured of support from the organisation.

They say even in pig-dense areas there will be nearby farms without pigs, allowing producers to load up a few and take them to the neighbouring farm, where they can add even more interest for the public and get their point across at the same time.

And with the introduction of eAML2, a movement licence can be sorted out online, making it a simple thing to do.

BPEX head of communications Andrew Knowles said: “This buddy system is a simple solution to a potential problem and means many more pig producers will be able to take part.”

She said: “Biosecurity can be a big stumbling block for a pig producer wanting to take part in Open Farm Sunday.

“I have always wanted to be part of it but that has been holding me back. The idea of a buddy system will really get round all those problems and allow us to participate.

“It has certainly give me hope that we can play a role in the event this year because I believe it is very important to get members of the public on to farms.”