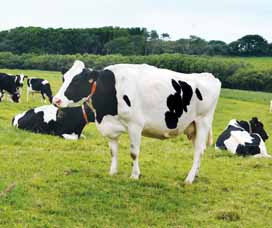 With escalating housing costs, farmers will be hoping for an early turn-out this spring and, according to Limagrain UK’s product manager Ian Misselbrook, a new type of Festulolium bred and developed in New Zealand may well provide the solution.

“Cows could be turned out up to three weeks earlier when grazing leys include Matrix, as it grows at lower temperatures than conventional ryegrasses.

“In a ‘normal’ year, this would allow the grazing season to be extended both before and after the summer which would allow savings to be made in housing costs and silage-making. Already this year, leys containing Matrix have started growing sooner than ryegrasses and will be higher yielding. So turn-out can be sooner and/or supplementary feeding reduced.

“Grazed grass is the cheapest form of energy for livestock, whereas ensiled forages cost more to produce and lose some nutritional value in the conservation process.”

By extending the grazing season, savings can be made as lower quantities of silage will be required. As a result, less input will be needed for establishing grassland, cutting swards, and then feeding silage out of the clamp. In addition, with cows staying out longer, less bedding will be required and there will be less slurry to collect and dispose of.

Matrix was bred in New Zealand specifically to suit rotational grazing systems, and has been registered as an Enhanced Ryegrass. It has been bred to be intensively grazed, which is different from other Festuloliums which are crosses between tall fescues and Italian ryegrasses, and are typically used for cutting leys.

“Matrix needs to be grazed very tightly or cut in the autumn to reduce the risk of winter kill. So it is only recommended for disciplined graziers,” says Mr Misselbrook.

Proof of its ability to extend the grazing season was witnessed at Limagrain’s trial site in Lincolnshire: In 2010, Matrix had started growing by 7 February and was ready for grazing by mid-February. This year the Matrix plots are again visibly growing ahead of all the other ryegrass mixtures.

“In Normandy and Brittany, Matrix is typically sown with white clover in rotational growing systems where it provides an extra two to three grazings each season thanks to its high yield and longer season of growth.”

On some farms, cows are being grazed on Matrix/white clover leys for up to 11 months of the year. It is also reported to give an extra 30% more yield and have a higher palatability than conventional ryegrasses.

Powys dairy farmer David Lee of Winnington Green Farm, block-calves his 330-cow herd starting in early February and then turns them out to graze from 10 February onwards.

Two new grass/clover leys were sown in June last year using a seed mixture with 40% Matrix. The aim being to reduce the amount of supplementary feeding required in the early spring and late autumn, by taking advantage of the extra weeks of production at either end of the grazing season.

“We started grazing the fields in July and noticed the Matrix leys grew back faster than in the other fields, and needed grazing sooner. However, the snow in November meant we had to bring the cows in early, whereas the plan had been to keep them out until 10 December,” says Mr Lee.

“At this point, the new leys have come through the winter OK, and have plenty of cover – they should hopefully provide some good early grazing. After all, grazed grass is a far better feed than silage.”