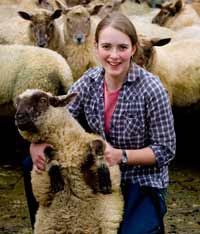 Sieving cow dung isn’t quite as daft as it sounds. It was part of a dairy rationing talk and we were checking the size of any larger matter that was left in the sieve which would suggest whether digestion times were efficient.

Our lecturer also created a mock rumen in a bowl to demonstrate the beneficial mesh effect that the longer chop length has in suspending a proportion of the concentrates. This effect helps guard against the overproduction of acid and encourages more alkaline saliva production through increased regurgitation.

What’s more, she explained the hand clap test for the consistency of dung. For the feed these cows were on, you don’t want to hear too slow a clap sound but you don’t want applause either…

As I write this, I’ve had a day spent completely out of the classroom. There has been intensive revision for a tractor-mounted pesticide application test (PA02). (Big question being, do you drive the tractor and keep warm but risk being heckled at? Or stand in the cold for a long time but under no pressure at all?) And there was an event in the sheep shed on this year’s cross-compliance criteria, highlighting the many and varied ways in which you can reduce your single farm payment.

While our first term ended with the loss of two tutors and farewell events for each, the new term has begun more positively with the arrival of three new tutors. So far we’ve met two.

The first is a professional agronomist and he’s already established himself as a tutor who’s going to challenge us rather than go through the motions of teaching. Both he and our lecturer on mechanisation believe in getting out into the field or into the workshop.

The latter is a strong advocate of precision and controlled-traffic farming. For anyone not familiar with these terms, an example of the first is chemical or fertiliser application only where, and in the quantity, it is needed. And the second is basically the careful management and reduction of wheelings through the field to reduce soil compaction.

Both these practices rely on advanced computerised systems, global positioning and often auto-steering. Unfortunately air-conditioned cabs and computerised processes feel very far away when your arm is up a ewe and you’re struggling to take hold of the head of a large lamb which has been dead for some time. Uncomfortable, messy, bruising and inadvertently showing the shepherd’s version of the builder’s bum, dignity is not an option in the circumstances.

In December I was boasting about my seven ewes, all pregnant in the first cycle, and the prospects of a flock of seven becoming 20 in February. Well, one of my ewes carrying twins decided to die and my forecast flock has therefore suffered a staggering reduction of 15%.

Still, I’m trying to think positively of the whole thing as “experience”. “If you have livestock, you have deadstock,” I’m often told.

Perhaps the expression “Don’t count your chickens before they’re hatched” should be changed to “Don’t count on the number of ewes and lambs at scanning time getting through to sale”.

Yet I’m still itching to get into the full swing of lambing next week. Why? For the magic which is that moment of success against all the odds.

Lizzie Jennings, 21, is in the second year of a two-year foundation degree course in Agriculture at Bishop Burton College in Yorkshire