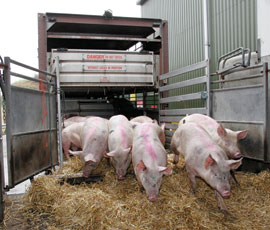 The highs and lows in the British pig industry are nothing new, but with many producers losing on average £18 for every pig they produce, some are left wondering how long they can ride the storm.

While there seems to be some optimism that prices will rise shortly, it doesn’t offer much hope to those who are struggling to make ends meet in the short term.

There is no silver bullet that will make the situation better, but focusing on efficiency could help producers squeeze out every penny.

Mark Hawe, pig technologist for The Department for Agriculture Food and Rural Development Northern Ireland says now is the time to sit down and look at records and then act upon analysis.

“You have got to look at getting that extra pig born alive. You have got to sweat the unit and push production as hard as you can until it is creaking,” he says.

Only with good records will producers be able to get the most out of their system, says Mr Hawe.

“I would encourage producers to spend time looking at slaughter returns, such as how many pigs are coming back overfat and overweight. You have to be more selective for slaughter; walk the pens and choose individuals rather than open the pen and let all 20 pigs go.”

He also urges producers not to “cut corners” in a bid to reduce costs. “Get unbiased expert advice on to the farm and don’t be tempted to make changes on a whim, like removing costly nutrients from the ration.”

Mr Hawe warned that any action farmers were taking now in terms of potentially reducing sows numbers or destocking could have repercussions nine months down the line.

“No one knows what the pig price will be doing in nine months time, so making the decision to take out passenger sows or destocking could have implications later on.”

Mr Hawe says reducing numbers is a difficult decision due to the lag time, however, he warns destocking with a plan to repop should only be done in line with health status, not in reaction to market pressures.

If you have got any background health issues on your farm then now could be the “golden time” to depop and get on top of the issue, says Andrew Knowles of BPEX.

“If you are facing a difficult financial situation then depoping is a way of adding value to stock; likewise if you have a disease burden you do not want to be haemorrhaging cash on your unit. So to sit down with your vet and see whether now is a golden opportunity.”

“When looking at increasing or decreasing slaughter weights, clearly other considerations, such as available accommodation, come into play. But it’s important to remember the extra weight is cost-effective, unless the business needs the cashflow increase from extra sales and reduced feed consumption.”