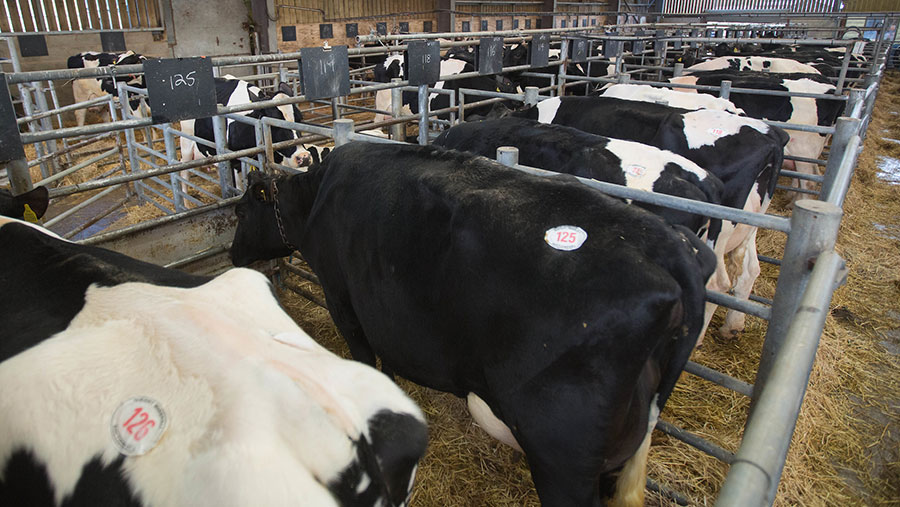 However, auctioneers admit trade eased slightly in the first quarter of 2018 compared with last autumn’s levels. First-quality cattle dropped £80-£100 and second-quality milkers slipped back about £150-£200.

Keen bidding has been reported for quality 30-litre heifers and cows giving 35-40 litres or more.

Supply has been hit by “the swing to beef” of 2015-16 when cheaper beef straw were used, while the demand side is being bolstered by beef prices and the values of cull cows and beef-cross calves.

Auctioneers say the shortage is down to:

A range of factors are supporting a very firm trade at Beeston, where Simon Lamb, Wright Marshall, says the main driver of a firm trade is the lack of cows nationally.

Throughputs have been about 10% down at mid-month sales for the past nine months or so, with Mr Lamb saying the switch to beef straws during the dairy downturn is now being seen in the dairy rings.

“Trade at our March sale was back up to the levels seen last autumn,” he explains. “Selling cows was definitely harder work in January and February but with milk prices falling at the rate they were it was hardly surprising”.

Dairy and store cattle auctioneer Trevor Rowland at Frome Livestock Auctions explains that weekly numbers at the Wednesday sale have fallen from 25 to 12-15-head in recent months.

Summarising the demand side of the market, Mr Rowland said: “Dairy trade is pretty good and has held up well considering the processors cutting prices.

“There are a lot of level profiles and people wanting to buy cows to keep up with weekly production levels and meet their quotas.”

Young cows are making just as much if not more than heifers, observes Tom Brooksbank, dairy cattle auctioneer and valuer of Gloucestershire-based Norton and Brooksbank.

He has noticed a definite premium for quality, with anything calved a long time, a touch lame or carrying a faulty udder down by several hundred pounds.

“Barren cows seem to have put a bottom in the market,” he says. “People seem to be keen to buy young cows at 35-40 litres/day or more – people need the milk.

“My impression is there aren’t quite so many cows coming into the country from Europe. The competitive pound won’t be helping that job too much.”