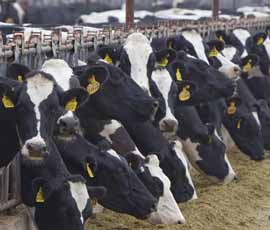 A farmer has spoken of his disappointment after his ambitious plans to build a 1,000-cow dairy in Wales were referred to the Welsh Government.

Fraser Jones wants to build the dairy unit in Leighton, near Welshpool, Powys.

In November, Powys Council planning committee said it was “minded to approve” the application, subject to a report about “outstanding issues”.

However, the Welsh environment minister has “called in” the planning application.

Welsh environment minister John Griffiths has acted in response to concerns about the plans, including the risk of pollution from slurry spreading, and the planned dairy’s visual impact on nearby Powys Castle.

The development is opposed by several groups, and is earmarked for farmland near homes and the village primary school.

In a letter to Powys Council’s head of planning services, the Welsh Government said: “In the ministers’ view there is insufficient information in these respects to show that all the relevant policy considerations have been fully addressed by Powys County Council’s planning committee in reaching its decision on the planning application.”

Mr Jones told Farmers Weekly he was “very disappointed” by the Welsh Government’s decision to call in his application.

“Powys County Council gave the project conditional consent. They realised the merits of the project and all the concerns have been addressed.

“The government talks about wanting private investment in the industry. They want jobs creation and food production, which is what this project would create.

“I’ve spent three years and a lot of money to get where we are now. Dairy farmers are suffering with high milk prices and many young farmers have dropped out of the industry.

“It’s worrying and saddening that the government is trying to stop young farmers like me from trying to invest in the industry.”

Rob Newbery, NFU chief dairy adviser, said: “It’s sad that at a time when we really need farmers to be encouraged to invest in their own businesses potentially planning policy is going to trip that up.”

But Simon Pope of the World Society for the Protection of Animals (UK), which is campaigning against the plans, said he was delighted by the news.

“Allowing a mega dairy to be built in rural Wales, which has some of the best pastures in Britain, would be a worrying precedent to set,” he added.

What do you think about the proposed dairy? Have you say and see what others are saying on our forums.