It’s all about running a resilient system at Sansaw Dairy, where James Thompson and his team milk 1,440 cows on the 750ha farm near Hadnall, Shropshire.

Mr Thompson, who set up the spring-calving dairy unit on a greenfield site in 2012, says that the business is all about “utilising as much grass as we can and converting that to milk at the lowest cost possible” and the cows currently graze all year round.

The huge focus on grassland management is the reason the farm was selected to host a visit of British Grassland Society members during the organisation’s summer visit, on Tuesday 11 July.

At that time, the unit was suffering a bit of a dry pinch as a result of the lack of rainfall, at a time of peak stocking densities on the farm – with 3 cows a hectare on the grazing platform. 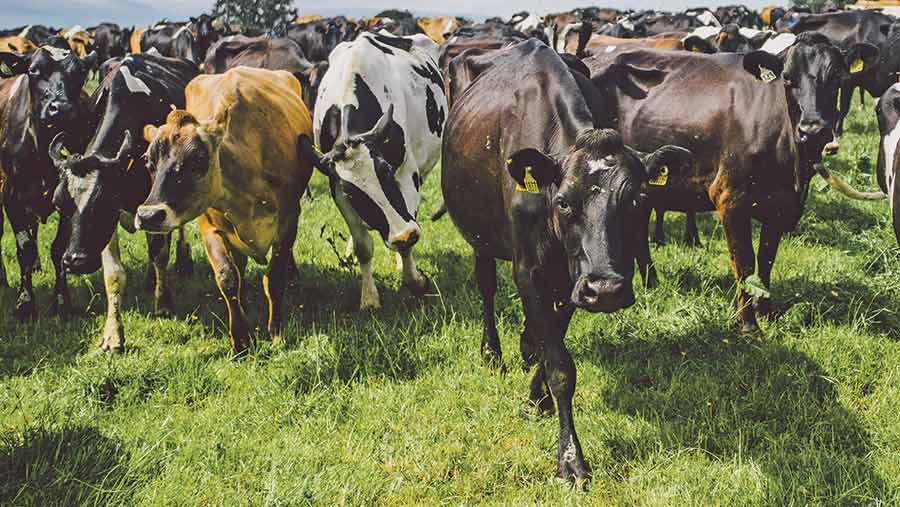 The New Zealand Jersey x Fresian cows are run as three herds: two main herds, split by age, and a small “TLC herd” (with any health issues). The herds are run completely separately to minimise spread of any disease or infection.

The two main herds will do 10 rounds/season of the 101-paddock system. The older cows are kept nearer to the parlour while the younger herd will travel further.

They run on a 24-hour break, although they will see two paddocks a day if necessary. The paddocks are sized between 3ha and 10ha, and average 5.5ha.

On the day of the visit, the older herd were turned out to a grass cover of 2,550kg DM/ha, but Tom Moore, the grassland manager at Sansaw, aims to turn them out to 2,800kg DM/ha and move them at a residual of 1,450kg DM/ha.

Cows have been overwintered at grass for the past five years but they are buffer-fed at the shoulders of the season or in a dry midsummer if sward growth falls. 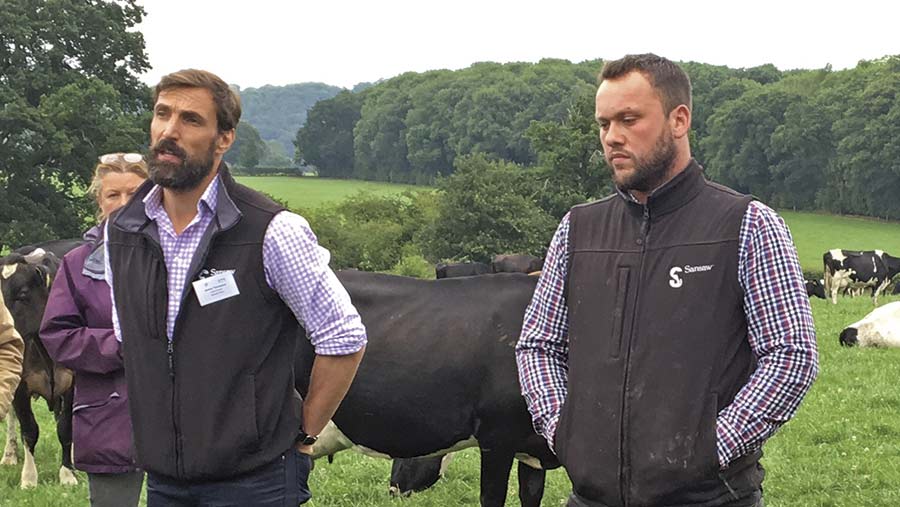 Re-seeding and dealing with bloat

Most of the farm was reseeded in 2012 and since then all old pastures have been reseeded, either by burning off and direct drilling seed or putting in a breakcrop of fodder beet before sowing fields with high-sugar grass and clover.

The platform has a high clover content, which brings bloat challenges. While it is good for the milk solid and protein content of the milk, which is important because the farm is on a manufacturing contract, typically five to 10 cows a year are lost to bloat. But the team have a system in place to minimise this risk.

The staff put oil in the water troughs before milking. When the cows are in for milking, they feed them corn in the morning before they are turned out – to take the edge off their appetite – and encourage drinking from the water troughs with oil. They than check them 90 minutes after milking.

The Sansaw herd is currently yielding 5,000 litres a cow a year, 4,000 litres of which is produced from forage alone.

The cows are fed 450-500kg per head a year of a 16% protein nut in the parlour, but this amount of concentrates will be increased as Mr Thompson aims to drive production at the higher stocking rate.

Cow weights average 475kg and the aim is to achieve 428kg of milk solids, amounting to 90% of the cow’s bodyweight. Selling to Arla, Sansaw Dairy received 23p/litre in May, 25p/litre in June and 31.5p/litre in July.

The average milk price for 2017 will be around 30p/litre, a comfortable margin above the 22p/litre cost of production, including finance.

All soil on the sandy medium loam farm is tested on a three-year basis, so a third of the ground is tested each year. And fertiliser is GPS-spread, generally following the cows.

The aim is to grow 14t DM/ha from 180kg fertiliser. Nitrogen will be applied every 30-40 days in the season from February/March through to October.

Typically, 30kg N/ha is applied per dressing, with 19kg/ha of potash and 7kg/ha of sulphur.

“We need the growth in the spring because we are out grazing early,” explains Mr Thompson.

Silaging is carried out in the spring to stay on top of grass growth and “reset” the grazing paddocks. When any ground is silaged, this will be followed by 200kg of potash.

The target is to get phosphorous levels at Index 3 and potassium at 2-2.5.

Dirty water, from a lagoon on the farm, is also irrigated to some of the land each year, with slurry spread by a contractor using an umbilical system with a trailing shoe where possible.

The cows are the main weed control tool on the farm, but topping and mowing are also used as control methods.

Measuring grass with a plate meter on a grazing platform this size would take a day and a half. Instead, a quad bike fitted with an Ag Hub Feed Reader, which cost about £2,500 two years ago, is the workhorse. 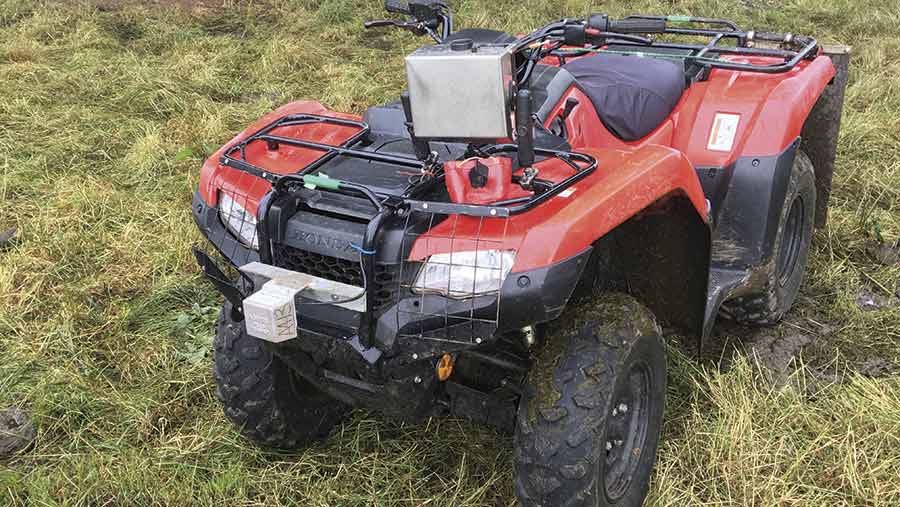 It takes Mr Moore three hours to travel the same route through the grazing at 15mph, each week. He has clocked up 700 miles on his three-week-old quad bike already.

The ultrasonic sensor on the feed reader measures the height and density of the grass and Mr Moore puts this information into AgriNet grass management software between each paddock.

Back in the office, he uses the data to form a grass management plan for the week ahead, including grazing, fertilising and silaging.

This data is also used in December to review the year’s grass cover and adjust the fertiliser plan for the following year as well as plan any necessary re-seeding.

The system has been running for only five years, and Mr Thompson says that this is the year it all feels like it is coming together.

He says he would not change much about what they have done in setting up the unit and the management of it, although he would spend more capital up front if he were to do it again – particularly on jobs such as fencing – so that it wasn’t such an ongoing task.

Key to the business’s success have been the people, Mr Thompson believes.

He is passionate about getting good people into dairy farming and believes that working conditions, facilities, remuneration and hours on deck are all incredibly important in order to build and keep a strong team.

The next step for the Sansaw dairy unit is to get some housing on the farm. They are applying for permission to erect a building for 1,200 cows.

The shed will be roofed and bedded with straw, which is an important fertiliser for the farm in terms of soil conditioning, water retention and grass growth.

It will be built so that it has capacity for cubicles in the future if required and the cows will be fed silage.

The aim is that the housing will allow consolidation of workload and labour efficiencies, making work easier for the staff if the calving cows, youngstock and dry cows are all housed separately, but in one place, as well as being able to overwinter the stock.

One of the reasons Mr Thompson wants to be able to overwinter stock is the public perception of having cows outdoors when there is little grass in the fields in mid-January.

While the cows are adequately fed and healthy, the passing general public may not know that, so it can reflect badly on the farm and the industry.

The housing will also mean the option for a flatter milk profile will be there, should Brexit make it necessary.

Mr Thompson believes there is a risk to spring milking herds if the export opportunities to Ireland are restricted, so wants to be flexible if they need to adapt.