The highly anticipated Perfection Sale of world-class pedigree dairy cattle at Shrewsbury Market, Shropshire, at the weekend (21 April), saw bidding peak at £22,575 with a new record average of £4,600 set for a dairy collective sale.

A packed ringside of buyers was treated to a dairy breed spectacle as more than 50 live animals strutted down a catwalk, with flash lighting and a smoke machine.

The event was the brainchild of young breeders Richard Bostock, James Doherty and Tom Lomas, who said the sale would be something “never seen before” in the UK – and they didn’t disappoint. 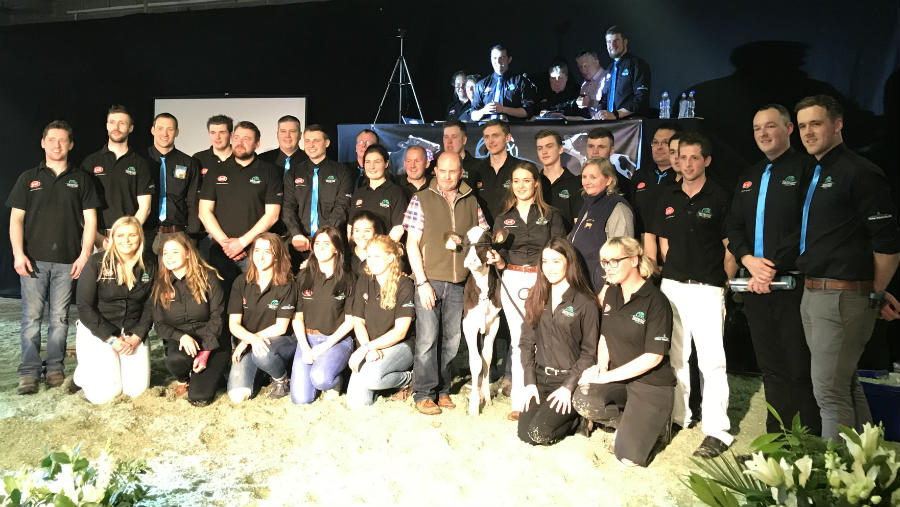 The Perfection Collection team pictured with the top priced lot, its vendor and buyer ©Rhian Price

Auctioneer Jonny Dymond said: “It was a fantastic sale. [There was] a great turnout and great atmosphere and it was a real privilege to conduct a sale with such fantastic support from breeders all over the UK.”

Sale leader at £22,575 was the maiden heifer Tynevalley Rubi A Bambi from C&R Baty and family, Nantwich, Cheshire. This January 2018-born Mr Rubi Agronaut heifer boasts a PLI of £737 – fifth-highest in the world and the second-highest ever to sell. Her dam is Tynevalley Supershot Bambi, which sold for €23,000 in the German Masters sale. Buyer was Messrs Robertson, Ashlea Farm, Bristol. 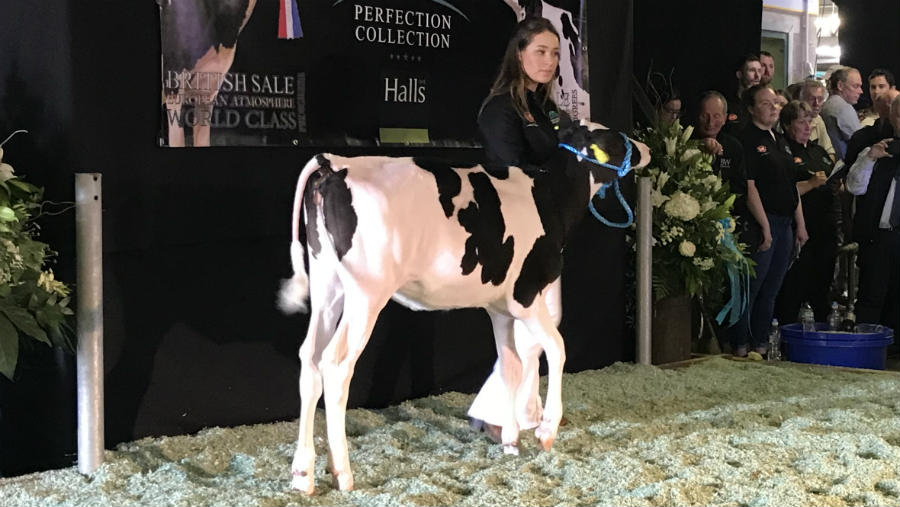 Second top price of the day, and the highest-priced embryo package, was six sexed IVF embryos from Rosiers Blexy Goldwyn EX96, sired by Maverick Crush and Blondin Raptor. They sold for £3,203 each – a total of £19,215 – to a syndicate of T Lomas, M Roberts, R Tomkinson, M Nutsford and R Lloyd.

Selling for £17,850 was the first lot into the ring: Riverdane Aikman Ghost Red VG89 from M Nutsford, Middlewich, Cheshire. This four-year-old is by Gen-I-Beq Aikman and is out of Riverdane Roses Ghost Red VG85. She is currently giving 45.8kg daily at 4.59% fat and 3.25% protein and sold in-calf to Woodcrest King Doc. Buyer was NJ and LC Sercombe, Lutterworth, Leicestershire.

Just shy of this and selling in absence to South African bidder Martin Voight for £16,800 was the January 2018-born heifer calf Bel Bag2 Capi-Margot from Bel Holsteins, Buriasco, Italy. Sired by Oh-River-SYC Byway, her dam is Du Bont Vent Inkapi Ex90, who won intermediate champion at Swiss Expo and Cremona in 2016.

Making £11,550 and selling to Peter Prior of Designer Holsteins, Essex, was VeTech Atwood Elegance 2 from VeTech Holsteins, Strandhead Farm, Mauchline, Ayrshire. She is sired by Atwood and is believed to be the only animal in the world bred from three generations of dams classified Ex96.

The first, at £8,610, was the pick of four maiden heifers bred from the multiple prize-winning Peak Goldwyn Rapsody Ex97 and sired by Mogul, from the stable of Bill Naden, Sterndale, Buxton. Rapsody is the three-times Dairy Expo grand and supreme champion and has won grand champion at AgriScot and UK Dairy Expo in 2014 and 2018. Buyer was Lewis Pearson, St Brides, Haverfordwest, Pembrokeshire.

Next, at £8,400 was the lot before this: Troutbeck Absolute Irene Red 3 from Philip and James Mattinson, Wigton, Cumbria. Sired by Apples Absolute Red, this maiden heifer is out of Schrago Italia Indiana Ex93. Buyer was Glasson Holsteins, Portadown, County Armagh.