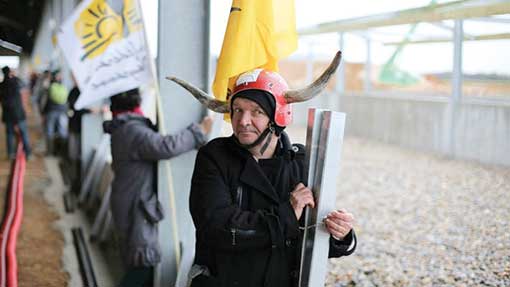 About one hundred activists opposed to “factory farming” have blocked a 1,000-cow dairy farm under construction in France.

The protesters belong to the Confédération Paysanne, an agricultural union that promotes organic farming and is opposed to large-scale agricultural production.

They handcuffed themselves to posts in a bid to stop the construction of the large dairy farm, which is located between Drucat and Buigny-Saint Maclou in the Somme.

According to the activists, the farm is a “symbol of industrial agriculture which kills countrymen”.

Construction magnate Michel Ramery, the 349th richest man in France, is determined to build the unit on a 5.7ha farm, which would become the largest dairy farm in the country.

But protesters have been increasing their activity against the €11m (£9m) project since 14 March last year after French authorities granted permission for the construction of the building.