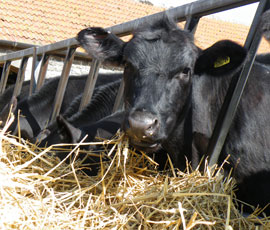 Results from a study looking into maximising returns from beef calves from the dairy herd are now available to farmers in a new booklet launched by AgriSearch.

The study, carried out by the Northern Ireland Agricultural Research and Development Council, looked into the health and lifetime performance of some 360 spring-born dairy-origin bull calves sourced from 12 farms across Northern Ireland.

Results showed calves with a poor immune status were less productive; they required more antibiotic treatments, had 17% lower liveweight gains during the first three months of life, were 17 days older at the time of slaughter and had a lower margin over feed of £20 a head.

In addition to these findings, the study found that although calves reared on a low-labour system (once-a-day feeding) were 7kg lighter at 12 months of age, they had a similar carcass weight at the time of slaughter. And labour costs on a 50-calf low-labour system were reduced by £1,273 over a six-week period.

It was found that those fed on the forage/concentrate system had a reduced lifetime performance and carcass value, the feed costs for every kg of carcass gain were lower – £1.80/kg compared to £2.04/kg on the intensive system.

In addition, the bulls on the forage/concentrate system also had a higher margin over feed costs of £53 a head – £236 compared to £183.

Similarly, the steers raised on the low concentrate system had a higher lifetime margin over feed of £184 compared to £62 – a saving of £122 for the medium concentrate input system.

In all, the study showed bulls were more efficient at converting food to carcass gain than steers and had a lower feed cost for every kg of carcass gain – £1.69/kg compared to £2.07/kg.

And under relatively low inputs of concentrates it was found that early-maturing (Angus) and late-maturing (Belgian Blue and Limousin) cross Holstein steers had a similar lifetime performance and similar feed costs for every kg of carcass gain.

Copies of the booklet can be downloaded from the AgriSearch website and are available by telephoning 028 8778 9770.