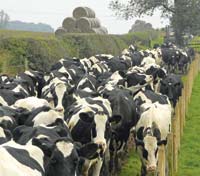 The BBC TV show Countryfile raised questions about the welfare of dairy cows during the episode screened on Sunday evening (10 May).

The show reported that the RSPCA believes that some dairy cows are being ‘milked to death’ with a spokesman claiming that “dairy cows have become one of the worst welfare cases in farming”.

It reported from a zero-grazing unit with reporter John Craven asking questions about the amount of space animals had and problems with lameness.

He then interviewed an organic dairy farmer who argued that too many farmers had adopted Holsteins, which were higher yielding but had problems with fertility and lameness.

You can watch the segment again on the BBC’s iPlayer (skip to 19.40 minutes to find the start)

Did you watch the show. Share your thoughts and read what others are saying on the forums?