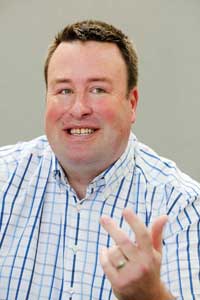 Bovine TB control was described as having no quick fix at the Beef Expo last week.

During a question time debate it was agreed a collaborative approach was needed by the industry to tackle the disease. Stuart Roberts, who sits on the Animal Health and Welfare Board for England said: “You cannot tackle this disease by picking off one component at a time – whether that be farm livestock or wildlife – you need a strategy to eradicate the disease, not just tinker with it. It will take every tool in the toolbox.”

Progress towards vaccination of cattle was also commonly supported by the panel, which consisted of nMr Roberts, Countryfile‘s Adam Henson, Poul Christenson from Natural England and Mike Gooding from FAI Farms.

However, Mr Gooding believed progress on vaccine development would be influenced by wider political issues. “If the economy collapses in Greece, political focus will not be on a TB vaccine.

“Maybe we as an industry need to think how research (in to a vaccine for cattle) is funded,” he said, suggesting that with the rise in the price paid for prime cattle, perhaps producers should consider contributing to funding for vaccine research.

Mr Henson also urged farmers not to go “to war over bovine TB” and advised farmers to work together.