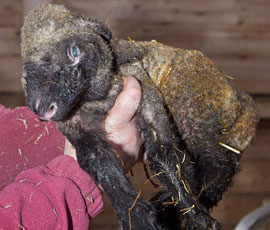 Confirmed cases of a virus causing deformities in newborn lambs have trebled – and the disease has now spread to cattle.

The number of confirmed cases of Schmallenberg virus now stands at 33 – including the first confirmed bovine case reported in West Sussex.

Additional tests are in progress on the bovine sample.

The Hertfordshire case is outside the area initially said to be at risk from the virus. All the others are inside the initial at risk zone.

The weekly update was issued by the Animal Health and Veterinary Laboratories Agency on Tuesday (7 February).

Previously, the number of confirmed UK cases stood at 11.

The virus is believed to be spread by midges being blown across last summer from affected areas in northern mainland Europe.

The AHVLA said all the counties where infection had been identified were in zones recognised as potentially at risk from infected midges.

Enhanced surveillance for infection had been implemented and the number of samples submitted for testing continued to increase.

Organised by the Mid Downs Sheep Group, the evening meeting will include a presentation by a veterinary expert.

Schmallenberg virus is not a notifiable disease but farmers and vets are being urged to report any suspicious cases for testing.

The European Centre for Disease Prevention and Control suggests there is a low likelihood of any risk to public health.

Livestock have now tested positive for Schmallenberg virus on 314 farms in Germany – the country where the disease was first identified.

Meanwhile, in France there are now more than 50 confirmed cases of the virus spread across 14 provinces.

Livestock symptoms can include a temporary lack of appetite, reduced milk yields and loss of body condition.

But pregnant animals can be more seriously affected.

The virus can cause considerable congenital damage, premature births and reproductive disorders.

Analysis of genetic material in Germany suggests the virus belongs to the Simbu serogroup of Shamonda, Aina and Akabane viruses.

To speed up detection, Germany scientists have shared their testing methods with Belgium, France, England, the Netherlands, Italy and Switzerland.

But it is still unclear whether the virus is newly introduced or whether it has been present undetected in ruminants in Europe for some time.

For more background and information go to our Schmallenberg dedicated page