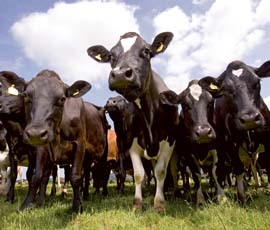 NFU dairy board chairman Mansel Raymond made the stark prediction ahead of the dairy summit in Warwickshire on Wednesday 20 April.

Milk prices to British farmers were 3p below the European average, he said. The UK was 23rd out of the 25 countries in the European milk price league table.

A trickling of milk price increases were coming through, Mr Raymond acknowledged, but they were totally inadequate to offset dramatic increases in feed costs.

Most farmers would continue to milk cows during the summer when grass was plentiful. But many would be forced to think again come the autumn.

“If we do not get our market prices right before we head into the winter, with the input costs we are facing I hate to think what will happen.”

The next six months will be critical for the industry, Mr Raymond said.

“It is our biggest challenge. Time is not on our side and an awful lot of work has to be done to get the message across. Margins must improve.”

Tactics for farmers trying to secure better milk prices were among the topics discussed at the NFU-hosted dairy summit in Kenilworth.

The event included the launch of a pricing plan by NFU Scotland, which the organisation believes could transform the milk market (see panel).

For some producers, though, the end has come already. Auctioneer Wright Manley will be holding no fewer than six dispersal sales in the coming month at Beeston Castle, Cheshire.

Auctions will include cattle from as far afield as Norfolk, Cumbria and Devon.

The price for calf feed coming off contract was going through the roof, warned Mr Horton. Fertiliser was rapidly becoming unaffordable and so too was diesel.

“It is frightening us to death,” said Mr Horton.

“They are selling tremendous amount of cows in our area. I was talking to an auctioneer last Friday and he said their books were stacked full to the gunwales with cows being sold.”

While some were older farmers choosing to retire early, others quitting the sector were younger farmers in their thirties and forties.

It was a tragedy that these younger farmers could see no future for the sector, Mr Horton said.