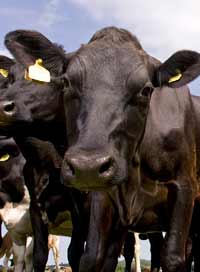 Contagious mastitis is still a significant problem among UK dairy herds, according to results from Intervet Schering Plough‘s National Mastitis Survey, presented at this year’s Dairy Event and Livestock Show.

About 31% of the 1322 respondents, representing 22,000 dairy cows, were positive for Staph aureus, said vet, Andy Biggs.

“We may think that contagious pathogens such as Staph aureus are under control, but these results show they are still a big player.

“As a result, farmers must play close attention to parlour routine to keep the problem under control.” Thirty-six per cent of farms were also positive for Strep uberis.

“And, with many farmers looking to expand to cope with the current milk price, they may be keeping high cell-count cows they would have traditionally culled – yet again increasing the risk of infection.”

Data also showed about three quarters of mastitis occurred within the first 100 days of calving. “This figure is mostly due to the huge stress challenges cows are placed under at calving, but may also be a result of infection during the dry period,” he said.

Results also showed more than one third of farmers were using two to three mastitis tubes for each mastitis case. And worryingly, about 12% of respondents were also using six to 10 tubes.

“This demonstrates some farmers are struggling to get these cows better.” And following on from this, figures suggested a lot of farmers were using a combination of tubes and injectibles.

“Two thirds of respondents were using a combination of treatments on up to a quarter of their mastitis cases,” he said.