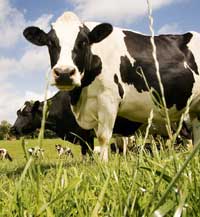 British dairy farmers are losing more than 3p on every litre of milk they produce, according to the NFU.

According to a report published by the union, high costs of production and poor milk prices have left the dairy industry facing a £330m deficit on the 22bn litres it produces annually.

The report, The Cost of Milk Production, collected the costs of production from 809 dairy units across the UK from April 2009 to March 2010.

It also projected costs from April 2010 to March this year.

The figures revealed that the huge increase in feed and bedding costs was adding pressure to a sector already struggling to make a profit from an average milk price of 25.9p/litre.

The average cost of production was actually 29.1p/litre, the union said.

“It is true that prices have started to move up but some milk buyers have told their farmers to expect only a penny increase,” he added.

“That’s a drop in the ocean given the scale of the price problem we are faced with.

“I’m seriously worried that for many dairy farmers it could be too little, too late.”