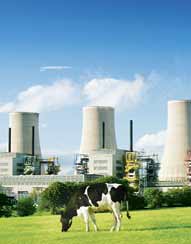 When you don’t create change then change will create you. Never has this maxim been more relevant than when considering the impact on UK agriculture from the growing pressure to cut carbon emissions. This single issue provides in equal measure both a massive opportunity and a considerable threat to our dairy industry.

But how can that be? Well as farmers when we pretend carbon reduction is not our problem then we risk the long term viability of our industry – we could see low carbon imports replacing our products on the shelves. Conversely, when we work towards reducing our carbon emissions then we will see farmers achieving better technical performance while also giving the UK dairy industry a positive marketing strap line – “low carbon milk”.

The fact is pressure on low carbon dairy production is not going away. With publication of the Food 2030 policy the government has firmly indicated its intention to reduce carbon output from UK agriculture, and, of course, the dairy industry has already made commitments in this respect with its dairy roadmap.

But it isn’t only legislation that will drive this change – consumer pressure will play an important role. Lobby groups and sensationalist media coverage – “Kill a cow and save the planet” – will help shape popular opinion, and consumers will begin to actively include the carbon footprint of a product within their decision making when purchasing.

Many in the industry seem to perceive carbon footprinting is just today’s latest marketing hype, that it has little to do with farming, and that any attempt to measure carbon output or reduce it will simply result in additional paperwork. This is not the case. It is well documented farming, and in particular ruminant dairy production, is a considerable contributor to climate change. It’s estimated agriculture produces between nine and 18% of all greenhouse gas emissions.

The interesting thing from a dairy farmer’s point of view, however, is that methane is the biggest contributor of carbon equivalent emissions from dairy production, making up 52% of these emissions/litre. It is hardly influenced by yield, so when producers can improve technical efficiency and produce more milk for every cow, then carbon emissions will fall for every unit of output (the only effective way of measuring a carbon footprint).

The push for reductions in carbon output might actually be a good thing. When dairy farmers increase yield a cow, reduce replacement rates, calve heifers earlier and feed more by-products then carbon output will be reduced. Optimising the use of fertiliser/manure and reducing energy consumption will have the same effect.

Perhaps unsurprisingly, improvements in all these areas will also improve the financial performance of a herd.

The E-CO2 Project is a consultancy business providing energy and carbon audits and advice to farmers. Our data show a direct correlation between carbon efficient farms and good performance, with those with the lowest carbon output having costs of production some 2-3p/litre better than those with the worst carbon output.

We have also found carbon inefficient farms can typically save up to £4300 a year through better use of slurry and reduced fertiliser use. In addition, four out of five dairy farmers have seen average savings of £715 a year (for a 1.3m litre producer) through more efficient use of energy.

So the message is clear – embrace low carbon production, identify areas for improvement and see a corresponding improvement in financial performance, while safeguarding your future. It seems the pressure for low carbon food might be a good thing after all.