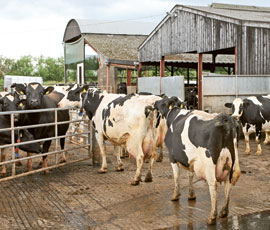 Cow flow and prompt treatment of lameness cases were just some of the topics up for discussion at the recent National Cattle Mobility Event, Cirencester. Aly Balsom reports.

Most farmers recognise that cows enter the parlour in a different order to when they come into the collecting yard, but are you factoring this re-shuffle into space availability?

To allow this movement in the collecting yard, the average UK black-and-white cow needs to be provided with 1.8sq m an animal. Without this, both cow flow and foot health could be compromised.

“The first sign of pressure is when cows are touching each other sideways. The second is when you see cows reversing; when there is insufficient space, lower dominance cows will back off to avoid the heads of higher dominant animals.”

To address cow flow, commonly stockman will either apply more pressure with the backing gate or go out into the yard to push cows in. However, this can often cause more problems.

“A lot of human factors effect cow flow – cows have flight space and a balance point. If you come in front of her shoulder, she will back off or reverse. Ask yourself if you need to double the distance on approach.”

A harsh voice will also disrupt cow flow. “Cows like routine and touch – we all know this, but sometimes it is forgotten.”

In New Zealand, where cows have thin, worn soles from walking long distances on abrasive surfaces, human pressure can also illicit twisting and turning, resulting in the opening of the white line.

“Impatient handling and poor cow flow in New Zealand results in lameness, but cow flow remains relevant wherever I am in the world – good flow in and out of the parlour should reduce foot damage.”

In a herringbone parlour, as soon as the parlour gates come up, some cows will automatically move from the back of the collecting yard to the front. Often an individual which stands at the front of the yard will remain there for most of milking.

Using the backing gate too much before this re-shuffle can mean that cows are not able to rearrange themselves in their preferred order, and consequently flow is disrupted.

Mr Chesterton recognised that it was difficult for herdsmen to realise what was happening in the collecting yard when they were down in the milking pit and because of this, over use of the backing gate should be avoided.

“Try not moving the gate and see what happens. The important thing is not to overuse it. There should be a time delay of five seconds at a time.”

And at the start of milking the backing gate should not be used until at least 20% of the herd or two rows or a rotation of the milking platform has been completed.

Gate speed should be set at 6m a minute in a rectangular collecting yard and 12m a minute in a round yard. “For the cow, gate speed needs to be slower – all the gate should do is wake the cows up a bit and take out a bit of space,” Mr Chesterton said.

Learn how to spot lameness

“Spot lift look” should form the basis of lameness management on any dairy farm to ensure maximum cure rates.

It takes two to four months for a bruise to work its way down the hoof, produce an ulcer on the bottom of the sole and cause obvious lameness. Consequently, it is crucial to pick out cows with subtle signs of lameness as early as possible.

Nick Bell, lecturer in livestock extension services at the Royal Veterinary College, said the biggest factor effecting successful treatment was how quickly a lame cow was spotted and acted on.

“The DairyCo mobility score system provides a simple tool for detecting the early stages of lameness sooner than is usually achievable with general inspections,” he said.

“It is important to look at cows as they walk freely and loosely – something which is difficult to do in the collecting yard or at the feed barrier. Producers also need the right facilities and skills so that feet can be lifted within 24-48 hours of lameness being identified.”

However, those cows which were treated according to the farm’s usual protocol had a 35% cure rate in the same period.

Dr Bell said this was not a reflection of farmer skills, but rather an indication of the difficulty of picking up subtle lameness when not part of a consistent routine.

“On half of the farms, cows had been subtly lame for 100-200 days before they got in the crush. Without a list or mobility score to work to, it is very difficult to pick up these cows.”

Most of the cows in the early treatment group had overgrown and bruised feet which were the future sole ulcer problems. “Most farmers see a massive reduction in sole ulcers when they pick up these cows early,” said Dr Bell.