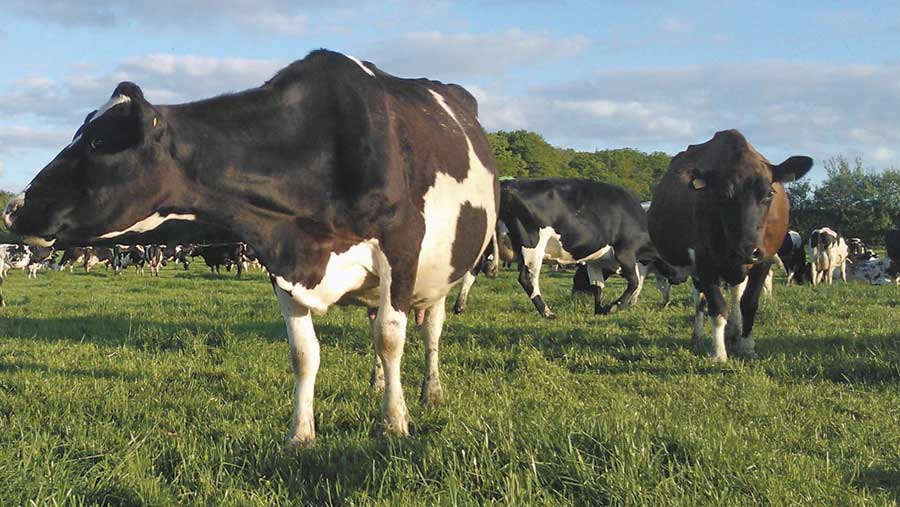 Cows at the Lywoods' farm manage an average annual milk yield of 6,000 litres

A planned herd expansion on a West Sussex Farm was put on hold during the recent dairying downturn but is now progressing amid strengthening milk prices.

Father and daughter Roger and Kate Lywood aim to be milking 450 cows within two years – up 100 from the current herd size.

They are growing numbers by breeding their own replacements.

The business, which supplies milk to Arla, has already undergone a major change with a switch from autumn and spring split-block calving to a spring-only system, adding 100 cows to the herd during that process.

With Ms Lywood now joining her father in the 280ha business, the plan is to grow cow numbers further.

The Lywood are tenants at Marshalls Farm and their landlord is supporting the expansion by providing the capital for a 250-cow cubicle shed while the business will pay for the concrete and fittings.

This additional housing will be in place when cows are housed this winter.

Ms Lywood admits delaying expansion was the right decision and instead 55 youngstock were sold last year.

“In the past couple of years our focus has been on keeping costs very low and maintaining good fertility in the herd,” she says.

“The low milk price didn’t put us on a sound footing to convince our landlord to invest in the infrastructure for expansion but the time is now right to move ahead.”

The expansion plan is based on a breakeven milk price of 21p/litre from the herd of New Zealand-cross, British Friesian and Swedish Red crossbreds.

The average annual milk yield is 6,000 litres at 4.51% butterfat and 3.55% protein, produced from grass, forage and 1t of concentrates.

The Lywoods are budgeting for yield to dip to 5,700-5,800 litres in the short term when heifers join the milking herd.

The additional housing will mean the April calvers will not need to be dried off in early January, a system that is in place to free accommodation for the early calvers returning from off-lying sites.

“Drying off is currently dictated by housing availability but once the new shed is up and running we will be able to carry on producing high yields of quality milk later into the season,” Ms Lywood explains.