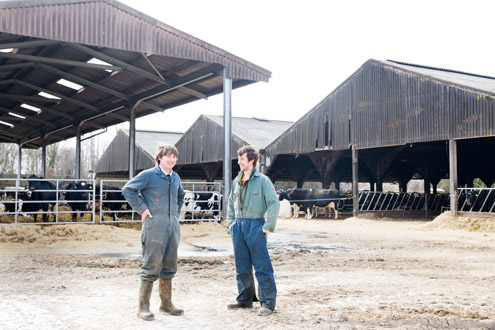 At the end of April, we decided to purchase 81 cows. It was a slightly rushed decision that resulted in us chasing ourselves around the yard trying to keep on top of the paperwork and management groups, as well as learning some new faces. The extra numbers highlighted a few issues with cow flow and so pushed us into doing some jobs that are usually on our “wait-until-tomorrow” list.

The parlour had an 18cm step at the entrance and we always felt it didn’t really flow from the collecting yard. We made a long ramp out into the collecting yard using some rapid-set concrete that turned out to be very rapid. Nevertheless, it certainly seemed to help by taking half an hour off the milking time almost immediately.

A gate right on the entrance was giving the cows a great excuse to look over and see what was going on in the calving yard. We raised this to stop these cows from blocking the entrance or even to encourage them in.

We’ve also fitted a cluster flushing system to replace manual dipping that has made milking easier for one person. When the cows are not fed in the parlour all these little things have a much larger effect on cow flow.

June has provided a decent spell of weather, allowing us to harvest our first cut silage and even spread some slurry. This should free up the system as youngstock can now move out on to the silage aftermath and get some much-needed exercise.

The last of four runs of cubicles has commenced and so we are coming to the end of a very long transition from straw yards to sand cubicles. This will take us up to 288 cow stalls and should be ample housing for the milking herd and dry cows.

Brothers Ben and Sam Foote farm 150 dairy cows plus followers on 125ha with their parents in Hampshire. Production stands at 9,000kg, but this is expected to increase alongside the total of number of head