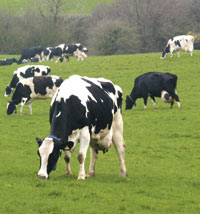 Beef and sheep producers across England are struggling to put adequate grazing in front of livestock after one of the coldest and hardest starts to the season in nearly 30 years.

Data on grass growth, collected at 10 college locations across England as part of the Farmers Weekly/EBLEX GrassWatch initiative, show distinct differences are now showing up, however.

“Re-seeds with the right balance of nutrients are really beginning to jump ahead now,” comments Grassmaster’s Charlie Morgan. “But generally yields are low, sugars are low and heading dates are delayed by at least a week.”

“So far results from the participating colleges have been pretty inconclusive – Newton Rigg campus in the Cumbrian hills hasn’t even had sufficient growth to measure. But further south and west, a pattern is beginning to develop.”

A good example is Kingston Maurward College, Dorset. One of the test fields, a three year-old perennial ryegrass ley with a good nutrient status, is putting on about 100kg/ha DM a day. But at Plumpton, East Sussex, organic permanent pasture has barely put on any, with an organic re-seed struggling at about 25kg/ha DM a day.

“Quality is also a concern and producers need to be aware there is an abundance of clover in many swards,” notes Mr Morgan. With grass growth held back, that means stock will be receiving a diet rich in protein, but low in energy and fibre.

“With these low temperatures, soil nitrogen and early applications won’t yet have been fully used. So balance stocking density carefully until growth picks up then we should see a steeper than average growth curve.”

In Devon this has already started, according to Hefin Llwyd, posting on the GrassWatch blog: “Grass growth is phenomenal now, with more than 2000kg DM/ha cover across the farm.”

But it’s been an awkward spring for his flock. “We had three weeks dry and then three weeks of the wettest weather I have ever known at the back end of March. One of the fields was so badly poached we have had to plough it up,” he reports.

• For the latest results from college farms around the country, visit the GrassWatch site.