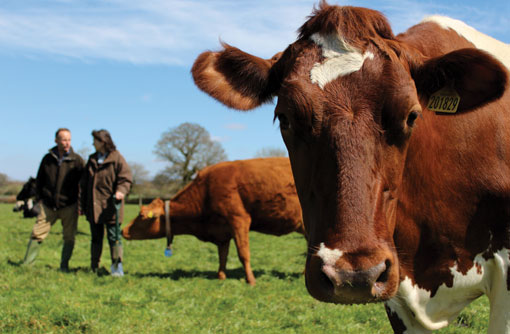 It takes a brave man to step away from 30 years’ worth of pedigree black and white Holstein genetics and overhaul a farming system, but Richard Pike has done just that.

Continuingly unpredictable weather and a desire to safeguard his business for the future means in a few years’ time Mr Pike will see a herd of red and white Ayrshires when he looks over the farm gate.

The crunch point came five years ago, when Mr Pike says decades of selecting for high-yielding Holsteins, reliant on high inputs, had resulted in a system with little scope for the future.

“We were on the all-year-round calving treadmill. It was like the tail wagging the dog because we were essentially working for the cows,” he explains.

“We were making a decent living, but there was nowhere to go and there wasn’t much for re-investment because costs were so high and fertility was suffering.”

Many Holstein farmers in the area were investing in large-scale, New Zealand-style, grass-based systems with small, spring calving Friesian cross Jersey animals. After joining a grazing discussion group, Mr Pike quickly recognised the benefits of such a system, but was unconvinced by the breed choice.

“I didn’t like the animals I saw. It’s not an animal I’d fall in love with and to do a job properly you need to be happy and work with the cows you love.”

Mr Pike and his wife Wendy were confident in the idea of moving towards a system that was more reliant on forage and grazed grass, however they quickly realised they had the wrong cows for the job.

“We realised the system we wanted was polls apart from the cow we had developed and they simply weren’t suitable. We didn’t have any other option but to change breed,” he says.

Volatile weather was also a significant consideration when going down this route. “As dairy farmers we need to accept the weather system we’ve got and farm with it. We’ve got to have a cow and set-up that will cope with it.”

The decision as to which breed to choose was a joint one between Mr and Mrs Pike. After falling for the Ayrshire cow, they quickly committed to changing their system, flying to Glasgow to buy 42 pedigree in-calf heifers from quality blood lines.

The Ayrshire would fit perfectly with the Pike’s system, fulfilling their desire for quality animals that would thrive in climatic extremes, while efficiently producing large quantities of high-quality milk from forage.

The farm had invested in an auto tandem parlour and cubicle shed for Holstein-sized cows, so going down the smaller animal route was not attractive. A limited grazing platform of 32ha (80 acres) meant herd size was restricted to about 250 cows, so achieving acceptable yields was crucial.

“We didn’t want 240 cows giving 5,000 litres. We wanted to bring back yields slightly, improve constituents and have a longer-lasting cow that was a better forage converter,” explains Mr Pike.

Having been on a liquid milk contract, the Pikes have changed to a constituents contract for a local cheese maker. Their target is to have a herd of 240 Ayrshires achieving 8,000 litres a cow a year, with 5,000 litres from forage, at 4.3% fat and 3.4% protein.

The herd currently stands at 230 cows, including the 42 bought-in pure-bred Ayrshires. Holsteins are artificially inseminated to Ayrshire, with the first cross-bred heifers due to calve this autumn.

They have stepped away from all-year round calving and now have 140 autumn block calving cows and 90 spring calving animals – something Mr Pike believes has improved quality of life for all on the farm.

“We’ve also definitely seen a reduction in vet fees. We’ve only had two displaced abomasums in the past 10 months and no cases of mastitis in the Ayrshires over the past two years. Our mastitis rates have improved anyway since moving to sand cubicle,” he says.

Looking back, Mr Pike admits that although the herd had always been grazed for about 6.5 months of the year, they were not using grass effectively.

“We wanted to bring back yields slightly, improve constituents and have a longer-lasting cow”
Richard Pike

To achieve milk from forage targets, while getting as much as possible from the restricted grazing platform, the Pikes quickly recognised the need to address soil performance.

After turning to independent consultant Josephine Scamell of Ground Level Nutrition, they instigated a soil management strategy that has included slit aeration, the use of slurry bio-treatments, gypsum application on specific fields, salt and calcium ammonium nitrate fertiliser.

“We slit aerate up to five times in a season, immediately after grazing,” says Mr Pike. “It’s important to do it then so you don’t damage regrowth.”

Mrs Scamell explains how slit aeration enhances microbial activity, which enables more efficient use of nutrients by the grass.

“Using a slurry bio-treatment also helps to produce a less noxious slurry. This, coupled with slit aeration, means soil microbes can use it more effectively,” she says.

Using calcium ammonium nitrate fertiliser instead of ammonium nitrate ensures a “calmer” release of nitrogen. With high microbial activity this results in better nitrogen capture and a steadier release to the crop.

Salt application once a year on silage and grazing ground also boosts grass palatability, while gypsum application on this farm has worked well to open up compacted clay ground. This has reduced the likelihood of water logging.

“This has all helped to improve soil performance and consequently cut nitrogen use,” says Mrs Scamell.

In the past, ground received 200 units of nitrogen an acre, but now this has been reduced to a maximum of 112 units.

Mrs Scamell says the soil management strategy has boosted the nutrient density for every kilo of forage produced.

By improving the quality of forage and achieving more efficient use, they hope to maintain yields, without buffer feeding and just feeding to yield in the parlour.

Mr Pike’s father lived by the rule you should have enough forage stocks for a May turnout. Although on average cows are now turned out in March, Mr Pike still adheres to this plan, ensuring a contingency of maize and grass silage should weather conditions turn for the worst.

“It’s a good discipline to have food in the larder until May,” says Mr Pike. “This means if the weather changes and I need to bring cows in, I can. We probably make 15 months’ worth of forage and make sure we’ve always got six months available in clamped form at any one time.”

By preparing for every eventuality and thinking ahead, Mr Pike says feeding and managing the cows in this year’s challenging spring has been no more difficult than in other years. In fact, he only opened last year’s maize clamp in February.

“If you think about tomorrow, today will take care of itself,” he believes. “You need to think where you are going to be in a week or in a month and always be on top of your game.”

This was demonstrated in his flexible approach to grazing at the start of the year, which saw cows put on to silage fields to safeguard his grazing for later on in the season.

“Cows were out during the day in April this year, but there wasn’t enough grass on the grazing ground. I could see there wouldn’t be enough in a month’s time if I grazed it.”

The herd was turned out on to 8ha of accessible silage ground, which provided 10 days’ grazing. Fields were then slit aerated behind the cows and 100kg/ha of calcium ammonium nitrate applied.

“Grass grows grass and I knew I would get good leaf growth and quality from these silage fields, while avoiding stressing the grazing platform,” Mr Pike explains.

“It’s all about flexibility and intelligent management. I can graze cows or I can bring them in because I’ve got enough forage to feed them.”