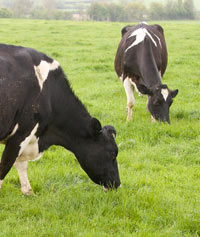 Setting challenging targets to fully exploit grassland production and efficiency could improve the fortunes of many dairy farmers even in times of low milk price, according to consultant Howard Hughes of Harvey Hughes Independent Rural Consultants, Cheshire.

“Improving grassland use by a Utilised Metabolised Energy (UME) figure of eight (8000MJ/ha) could produce another 1540 litres/ha. At a milk price of 20p/litre this would be worth £308/ha, which for a 200ha farm would provide an additional £60,000 income a year with no more inputs, merely improved efficiency,” he says.

The calculations are straightforward, says Mr Hughes. “The idea is to assess the site class from a scale of one to five (one being poor and five being good), then compare the mean figure for the class with the actual farm performance. The farm figure is calculated by working out exactly what the cows currently consume energy-wise from the forage.”

Quantifying the energy needed by the cows from the forage involves calculating the animal’s energy requirements in terms of maintenance, milk yield and growth and subtracting from that figure the energy actually fed in the form of concentrate and purchased forage. This total, divided by 1000, will give a UME figure.

But it’s important to get the right balance between grass quantity and grass quality, and preparing a grass budget can ensure an even supply of optimum quality grass throughout the season.

“It’s important to measure growth carefully each week with a rising plate metre or monitor leaf appearance rate and follow the golden 50mm rule – don’t let the sward go below 50mm under any circumstances.”

He says it’s normal to expect 25% dry matter losses in grown energy from grass whether it is grazed or cut for silage.

“Silage losses can be as much as 40%, while grazing will encounter a 5% loss through rejection every time the cows are turned on to the fields, so after eight grazings the rejection loss is as high as 40%.”

Maximising intake of grazed grass is vital as the more dry matter cows eat, the higher the level of output. Mr Hughes says the target should be an intake of 15kg dry matter at an energy density of 12MJ/kg or a total of 180 units of energy.

Grazing at 21 days intervals can also increase energy intake. “Recent research has shown grass grown to 21 days will always have an energy density of 12MJ/kg of dry matter, but declining by two units of D value a week after 21 days,” says Mr Hughes.

“Assuming a lactating cow can take in her maximum dry matter on a daily basis, it should be possible to have an annual litres sold of 6500 a cow from only 500kg of concentrate input – a margin for every litre over concentrate of 22p or £1430 a cow.”

Since carrying out UME calculations, which revealed dairy farmer Phil Brocklehurst could increase his bottom line by £37,600, he has started placing greater emphasis on grassland management, measuring grass with a rising plate metre and grazing the cows at an optimum grass height and density to give them the correct dry matter a day.

At a stocking rate of 1.97 LSU/ha with a nitrogen usage of 250kg/ha the theoretical UME should be 100 – an increase of 20 on the present performance.