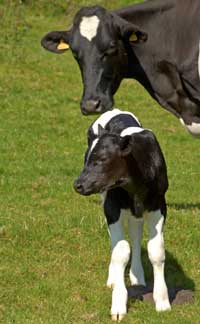 The number of black and white dairy calves retained in the UK for rearing and finishing has risen, according to a cross industry group.

The Beyond Calf Exports Stakeholders Forum was formed in 2008 as concern grew over poor dairy bull beef prices which meant many male calves were dispatched at birth.

In its annual progress report, Attitudes to male dairy calves are becoming more black and white, it is claiming to have made rapid progress.

There was a net gain of 61,000 dairy bull calves being retained for rearing and finishing in the UK between June 2008 and May 2009, the report said, adding the “Calf Forum has made progress in two of the three indicators”.

There has been a decrease in the number of live exports of calves for further fattening, with only 9000 calves exported, compared to 53,000 in the previous year.

“This is positive, but is determined by the prohibition of imports enacted by the Netherlands in July 2008 being continued,” the report stressed.

But the group has failed to reduce the number of calves killed at birth.

With almost no calves exported to Europe, it is not surprising this figure has increased, it said.

It is positive the Calf Forum has made progress in two of the three indicators, it said.

And at the same time the Forum’s actions should prevent a greater fall in prime beef production occurring from autumn 2009 onwards.

“The fall will occur because of the current deficit in registrations of about 175,000 calves as fewer cross heifers and beef cross male calves are being born.”

This is a point mirrored by EBLEX, which details a worrying acceleration in the decline of beef animals available for production following the latest British Cattle Movement Service (BCMS) data.