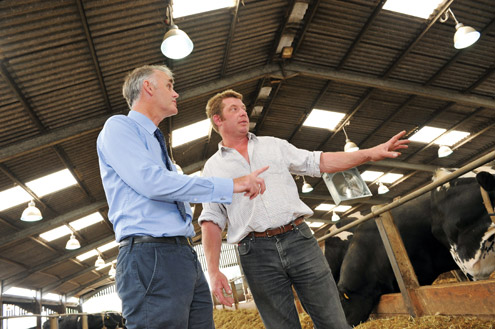 For dairy farmer Rob Davies (pictured above, right), of Sandhurst, near Gloucester, investing in a new lighting system has paid dividends.


Since installing 18-hour-a-day lighting at Barrow Farm in January, milk yields improved by 9% within 14 days and this prompted a move to three-times-a-day milking for the highest yielders.

As a result the £7,000 investment paid for itself within 10 weeks of installation, says Mr Davies.

Mr Davies and his partner Sarah milk 180 pedigree Holsteins and finish cattle born on the farm.

Before going ahead with the installation Mr Davies asked his vet to research the benefits. “She predicted a yield increase of between 8-10%, starting two weeks after the lights are installed. Sure enough, we saw a 9% increase in milk after just two weeks.”

Daylight regulates the hormone levels in cows. It reduces the amount of melatonin they produce, which, in turn, increases the amount of insulin growth factor-1 (IGF-1) and stimulates milk production. “It really is as simple as that,” says Mr Davies.

With 180 pedigree Holsteins in milk for an average lactation of 354 days, the benefits accumulated quickly.

Mr Davies waited one month to ensure gains were consistent before asking to change his contract with Cotswold Dairies from one based on milk solid content to a flat rate, working out at an extra £800 a month.

The lighting system has 60 low-energy light fittings, spread evenly throughout the building. They are set on a timer, so they come on at 5.30am and go off at 11.30pm. A manual override allows lights to be turned off during the day when natural light is high. Cows have 20 minutes to settle after milking before “lights out”, when there’s total darkness. “It means that staff doing the third milking are working in what is effectively daylight.

“This helps them to move the cows around more easily and observe them with no dark corners. It’s a much better environment for both cows and the team to work in.”

“The milking cows get the same ration all year round. One mix is fed to low yielders, then the mixer wagon is topped up with extra maize silage, molasses and dairy blend for the high yielders. By increasing yields, the new lighting has boosted appetites, but the extra amount and cost is negligible,” says Mr Hair.

While the rise in yield has a negative effect on visible heat, 18-hour lighting has a positive effect on fertility. And, with a combination of electronic activity monitors, tail painting and fortnightly vet visits, Barrow Farm has benefited from a fall in calving index from 440 to 412 days – an improvement that looks set to continue.

Mr Davies applies the same attitude to genetics as to the rest of the farm. “My aim is to breed powerful, functional cows that have got the strength to compete in the herd, last a long time with as little trouble as possible. The herd is getting much more standardised and a lot of our highest-yielding cows are home-bred, which is a great source of pride for me.”

Mr Davies has also made significant improvements to the building, too. “I’ve just built a brand-new, purpose-built shed for the dry cows and in-calf heifers, which transformed last winter. I was able to feed up to 80 head at one time, on one ration. But of course, one improvement leads to another and I’ve just had to install a new ice-builder unit, heat exchanger and a second bulk tank. Now we’re thinking about another cubicle building so we can milk high- and medium-yielding cows three times a day – we’re now putting a lot cows into the low-yielder group with a lot of milk in them. But extra cow health will be the deciding factor.”

Find out how lighting can be used in beef sheds