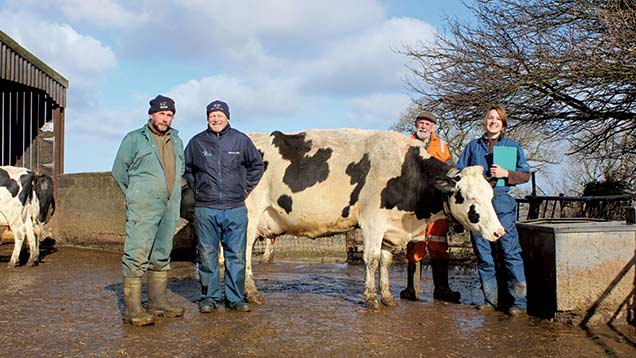 The first dairy farm to trial a new contract, which places a large portion of lameness control in the hands of the vet team, has witnessed a 75% reduction in lameness in just six months.

Dubbed “RMS for feet” by its developer vet Mark Burnell from Synergy Farm Health, the lameness contract has been designed to offer farmers a complete lameness package, with the vet team responsible for mobility scoring, trimming and treating any lame cows.

Mr Burnell explains that the concept has been developed to help dairy farmers struggling to identify and treat lame cows promptly.

“To control lameness, you need to spot lame cows quickly and deal with them effectively.

See also: How to prevent lameness in dairy heifers

You can do everything else, but if you don’t do this you will get chronic cows that are difficult to treat.

The trouble is, many farms struggle with lack of time, facilities or skills to identify and treat lame cows early,” he says.

This was the case for farmer Chris Childs of Newhouse Farm near Evershot, who has been the first to trial the contract.

Having previously used one of Synergy Farm Health’s vet technicians to trim cows, Mr Childs found he was often leaving lame cows for the trimmer.

As a result he was getting a few chronic cows that were not walking off farm.

Lameness contracts – how they work

“I was doing a lot of ‘I’ll do it tomorrow’ due to the time factor and the fact I didn’t enjoy doing cow’s feet,” says Mr Childs who runs the farm with his uncle Derek.

Mr Burnell says this is a common pattern. “Farmers also commonly build up a lameness tolerance so they don’t pick up cows early.

“That’s why we have incorporated fortnightly mobility scoring by an independent scorer into the contract,” he says.

After mobility scoring, a list of cows needing to be seen by the vet or trimmer will be drawn up.

For example, a score-two cow may still be score two a fortnight later, but may not need to be seen.

The farmer can also call out the vet in between visits at no extra cost to see to any lame cow.

Mr Burnell emphasises the service does not remove the need to address environmental and management factors influencing foot health.

At Newhouse Farm this has included looking at foot-bathing, concrete grooving and standing times.

However, since trialling the contract, the farm has seen a reduction in lameness incidence (mobility score three and three) from 40% to 9%.

The Childs chose not to cull chronic, score-three lame cows and have instead managed them down to a score two.

Mr Childs says the improvements have been marked.

“We now don’t have any ‘granny cows’ at the back [when they walk in] and since we started the lameness contract every cow we’ve culled has walked off the farm,” he says.

These culls now have a value of up to £750 compared with a cost of being taken off farm at about £92 an animal.

Mr Childs believes such contracts are beneficial to farm assurance and could help small and large farms alike.

“It doesn’t matter what pressure you have on your time, you know it gets done and it’s done by a professional,” he says.

At a cost of about £40 cow a year, Mr Burnell says the lameness contract is comparable to similar fertility contracts.

“I think they will also encourage farmers to pick out lame cows as they know they don’t have the hassle of dealing with them themselves.

“Hopefully it will increase awareness to lameness,” he says.