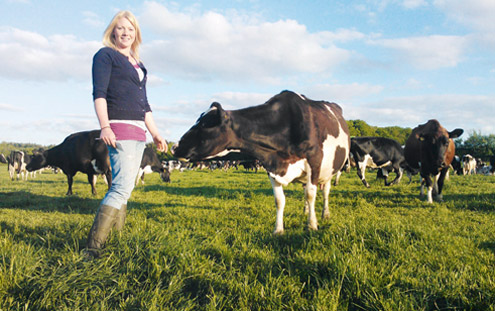 Keeping a close eye on breeding performance figures and ensuring targets are met is fundamental to the success of a block calving system.

Dairy farmer Kate Lywood, who runs a herd of 320 spring calvers with her father Roger, believes the key to good fertility is knowing exactly what’s going on.

And with the West Sussex farm looking to expand to 500 cows in the next five years – all by rearing their own replacements – getting cows in-calf is crucial to the success of the business.

At Marshalls Farm, the use of New Zealand herd management software, which is targeted at block calving systems, has helped the farm closely track herd performance, particularly during the breeding season.

“We look at breeding performance figures constantly using the farm management program,” Miss Lywood explains. “It allows us to set targets and lets us know whether we’re meeting them or not.”

The herd, which yields 5,800 litres a cow a year, calves in a 10-week block starting on 17 February and begins service on 8 May.

“We aim for a 95% submission rate in the first three weeks of breeding and for as few returns as possible,” she says.

“We set the submission rate, conception rate and pregnancy rate on the management software and monitor weekly by producing a chart or graph.”

Breeding targets are set after discussions with their vet Ben Brearley from the Livestock Partnership (see box).

“The software and records are only as good as you make it,” Miss Lywood stresses. “We enter AI data daily so submission rates can be monitored every day.”

The farm runs a grass-based system drawing on Miss Lywood’s experience of working in New Zealand. Cows are at grass for as long as possible, with the aim to only house during calving.

“Breeding for fertility is one of our main drivers, not only because we are block calving, but also because we are a closed herd and we need cows that last and get in-calf,” Miss Lywood explains.

The farm started with a herd of British Friesians, but after trying a few different breed crosses, they settled on a three-way cross: British Friesian to Swedish Red and then to a Kiwi-cross (Jersey x Friesian).

“We always pick bulls with a high fertility ranking and one of the reasons we use Kiwi-cross cows is because they give a fertility boost,” Miss Lywood explains.

“Because we are on a liquid contract, we use the Friesian for its stature and milk yields, while the Swedish Red is good for fertility and feet and not too small.”

The Lywoods operate a strict culling policy to ensure fertility is bred into the herd. No animal is given more than two services to dairy semen. If they fail to get in-calf after two services they are served to British Blue or Aberdeen Angus.

“We’ve always had this policy. Why would you give dairy semen if you’re on service number 13?” asks Miss Lywood. “Her daughter will then have poor fertility, so it’s a vicious cycle.”

The herd management software helps to keep on top of cow service records and ensures their commitment to only breeding from fertile cows is maintained.

“We produce an AI list after every milking that includes a record of how many services a cow has had. We can then assign a sire according to this,” she says. The herd had a cull rate of 20% last year, with 67% of the farm’s total leavers culled due to fertility.

Heifers are reared on contract at a nearby farm and only return back to the main unit after they have been served. Again the management software proves a useful tool in determining which semen a heifer is bred to, depending on her dam.

Heat detection is also taken seriously, with cows observed and recorded twice daily in the paddock as soon as they finish calving. Three weeks prior to service all animals are tail-painted red and everything seen bulling is recorded daily.

“If they’ve been seen bulling we won’t top them up with tail paint in the parlour,” says Miss Lywood. “Those that aren’t seen bulling will then go to the vet and anything that’s cystic or non-cycling will be put on a synchronisation programme.”

Cows are allowed to have a full cycle before they are served. Once everything that needs to has been seen by the vet, every animal will be tail-painted again. This time, when they are seen bulling, they will be AI’d in the morning.

Any animal that’s been AI’d will then go into a separate paddock and be tail-painted green in the afternoon, before joining the rest of the herd.

“We put them in a separate paddock, because anything that’s come bulling tends to really go for it,” says Miss Lywood.

“If we tail-painted those that were served in the morning they’d just rub it off. Having them in a separate paddock saves us having to top them up twice and means we can paint them all together in the afternoon.”

Miss Lywood says this obvious bulling is a consequence of breeding for fertility. This, coupled with the long daylight hours during the service period, means they have longer to express heats.