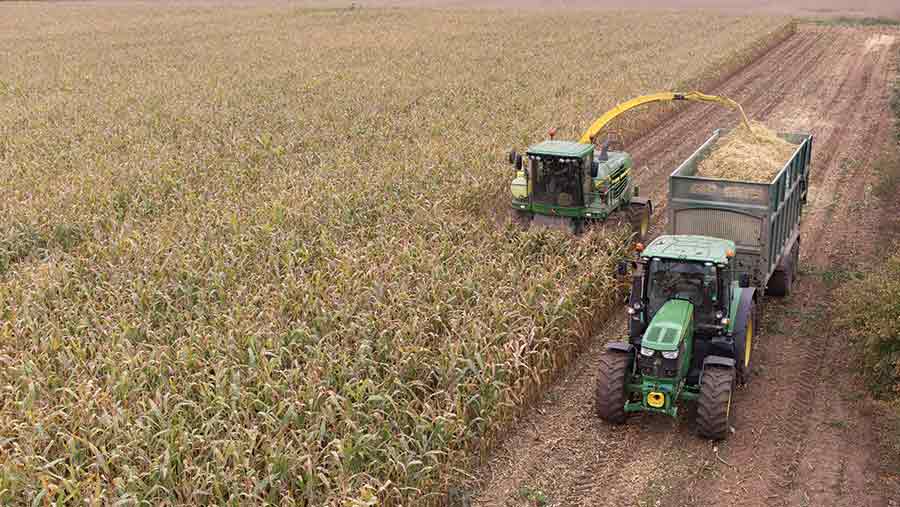 The risk from mycotoxins in forage has been significantly higher than normal this winter, thanks to a wet, humid August.

This climate was ideal for fusarium infection in maize and cereal crops, says Liz Norton, technical manager at Micron Bio-Systems.

A delayed maize harvest in many areas also extended the time available for mould growth, she says.

Yet the threat posed in spring and summer by mycotoxin contamination of maize and whole crop cereal silages is often overlooked, despite the heavy reliance on these forages in buffer feeds.

“Ruminants do have the ability to degrade some mycotoxins in the rumen, but the microbial activity responsible is drastically reduced any time rumen pH falls, such as when suffering from sub-acute ruminal acidosis (Sara),” explains Ms Norton.

“Sara is a particular problem when cows are turned out onto lush spring grass. It also damages the lining of the rumen, making it easier for mycotoxins to pass into the bloodstream.”

With latest estimates suggesting 10-30% of all UK dairy cows are suffering from Sara at any one time, the implications are significant.

Feeds such as maize and wholecrop cereal silages – that are more likely to be contaminated with mycotoxins – also contain high levels of starch that increase the risk of Sara.

According to the results of a 2014-15 survey, 90% of the maize silage samples tested contained detectable levels of mycotoxins, as did two-thirds of wholecrop cereal silages and 71% of total mixed rations (TMR).

In addition, more than half of the maize silage samples contained more than one mycotoxin.

In ruminants, the fusarium mycotoxins deoxynivalenol (DON), zearalenone (ZON) and T2 toxin are the most toxic, with fumonisin (FUM) and the aspergillus-produced aflatoxin less so.

“Maize silage is particularly susceptible, with 90% of the maize silage samples testing positive for the extremely damaging DON, and 54% for ZON,” Ms Norton adds.

“And remember that the effects of several mycotoxins can combine to produce an additive or synergistic effect, even at low levels.

“In contrast, very few grass silages are contaminated with fusarium mycotoxins, though they can be affected by the moulds associated with spoilage in the clamp, such as aspergillus, which also affects poorly stored dry feeds.”

“When looking to tackle a mycotoxin problem, it’s also important to understand the near-neutral pH of the rumen – where any mycotoxin deactivators or binders have to work – is very different to the acidic pH of the stomach in pigs and poultry,” says Ms Norton.

“In the past, there was little development focused on the specific needs of ruminants, but fortunately that is changing and ruminant-specific deactivators are now becoming available.

“The key is to recognise the symptoms of mycotoxicosis early – if production and cow health start to suffer, make sure you include mycotoxins on the list of potential causes. Adding a ruminant-specific mycotoxin deactivator to the ration is one of the most cost-effective ways to confirm whether or not mycotoxins are the problem,” she adds.