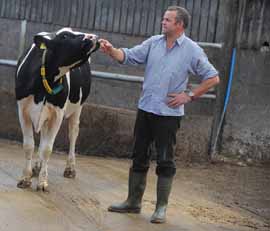 Farmers who hoped to establish Britain’s biggest dairy farm say they have no plans to resurrect the proposals.

The planning application was later downscaled to 3770 cows, before finally being withdrawn last month over environmental concerns. Now it appears the land will be farmed as an arable operation for the foreseeable future.

The company informed local residents of the decision in an email and statement on the Nocton Dairies website. “When the application for the dairy was withdrawn, we did not know what the next steps would be,” the statement said. “There was no Plan ‘B’.”

Company directors had held further meetings with the Environment Agency and local council to discuss the options for the land. Nobody new how circumstances or technology might change in the future, the statement said.

But it added: “We can confidently say that there is no intention to submit any further application for a dairy farm on the Heath.

“There would be an option to look at setting up a dairy on the Fen, but we currently have no plans to do so.”

The intention was to continue farming the land as an arable operation and to focus on existing dairy enterprises in Lancashire and Devon.