As more and more people leave the dairy industry, Olivia Cooper asks whether robotic milking could be the answer to attracting new blood.

Dairy farming is one of the most difficult sectors to recruit young people into, with long hours and poor profitability putting off all but the most dedicated workers.

The average age of dairy farmers is well over 50, producer numbers have dropped by almost 70% over the past 15 years, and an NFU survey recently revealed a further 9% plan to leave the industry over the next two years. So how can robotic milking help?

In Holland, about 15% of farms now use robots, says Jan Dirk van Mourik at manufacturer Lely. “It is growing extremely quickly – over the past few years, the number has doubled, then tripled. The UK is about five years behind, but the same thing is happening. Lifestyle is important and robotic milking provides more social hours.”

Although many family farms, with up to 250 cows, have installed robots for social reasons, herds of more than 1000 cows use them to improve labour efficiencies. “You don’t need to train a robot, and when you manage it well you are able to milk twice as many cows as with a parlour – the savings can be huge.”

A typical robotic system costs about £100,000, but requires significantly less space than a parlour. Each will cater for about 60 cows, depending on milk yield and seasonal peaks, and costs about 5% of the initial investment to maintain each year.

Sarah Bolt, DairyCo extension officer in Devon, says the number of robot milkers in the South West has rocketed. “So many youngsters have seen their parents working all hours, and perhaps not achieving the necessary profits. Installing robotic milkers means their time can be better spent doing other management tasks.”

Because of the reduced time spent milking, herdsmen need to spend more time observing the cows for lameness and heat detection, for example. But with automatic teat cleansing and line flushing after every cow, contagious mastitis can be dramatically reduced. The computer also identifies individual quarters, reducing milk wastage.

Robots must be easy for cows to access, with appropriate feed to motivate them to milk, she adds. “You may need to encourage lazy cows in every now and again. But robots give greater flexibility without relying on outside labour.” 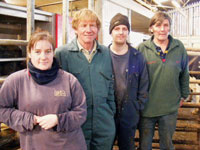 Steve and John Davey installed robotic milkers at Highworthy Farm, Clovelly, in 2008, after two years of milking nearly 400 cows through a 24×24 parlour.

We were milking for 12 hours a day, which just wasn’t sustainable, says Steve Davey.

The herd had grown rapidly after the brothers bought their neighbouring farm in 2003, eventually milking all the cows on one unit and rearing 400 youngstock on the other. “We couldn’t extend the existing parlour and the sheds needed modernising – robots looked like they would fit into our system well.”

The brothers split the herd into three groups, and installed six robots, at a cost of about £500,000 plus building costs. “Whatever we did would have been a big investment – at least this way we wouldn’t be so tied up milking cows,” says John Davey.

“It’s given us a lot more flexibility, and has definitely improved our quality of life. I think the payback will be quicker than a parlour as well.”

Yields have risen from 8600 litres to 9400 litres, with the cows housed during lactation and calving all year round. “Our cell counts have dropped from 220 to 128, and we pick up on mastitis cases more quickly.”

With John’s son Matthew, Steve’s daughter Marion and her husband all working on the farm, plus two other employees, the average age of staff is considerably lower than most. “We have 750 acres of arable and pasture, and do most of the work ourselves,” says Steve. “I definitely think robotic milking could encourage more youngsters into the industry – you get to look after the cows without spending so much time in the parlour.”

Marion agrees. “Working early mornings in the parlour, seven days a week, twice a day, is hard work and can get a bit monotonous. When you’re young, having more flexible hours makes a big difference to your social life.”