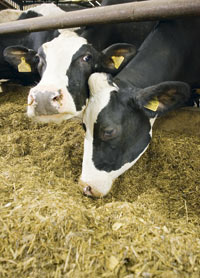 What if I increased cow numbers, employed a herdsman, or made better silage? If I could increase yields, how would profit be affected? Questions like these can be asked, tested and answered on a three-day workshop run by DairyCo.

Most dairy businesses are facing decisions about their future. And when Fred Harvey decided he wanted to focus on the likely impact of better forage management and in particular higher quality silage for his 120 cow herd at Ryan Park, Lanivet, near Bodmin he attended a DairyCo “What if?” workshop.

The software used in the workshops examines core costs a cow and allows producers to build scenarios to help them make clearer plans for their business.

And for Mr Harvey, the course really highlighted the value of quality forage feeds to his business. “It makes you think differently about your set up and allows you to look at alternative scenarios with their knock-on effects, but without the risk of having a go,” he says.

As a result of the course, Mr Harvey set a target ME of 11 for grass silage and invested £3800 in a grass turner. And, thanks to better silage additive and improved weather, he has come close to that target.

“We normally catch some rain once we have cut the silage, but this time it was just showers rather than downpours. We use contractors, but having the turner gave us a little more control and flexibility to make the silage more palatable.”

The results of feeding this season’s silage at 10.8ME against the 10.1 last year is something Mr Harvey is looking forward to seeing.

“The projected improvement is for a 0.5kg/litre drop in concentrate feed to 0.32kg/litre through the year. This should push margins up and we should also get a boost in milk production as the improved palatability will lift silage intake.

In targeting better quality forage, some ground was reseeded with Italian ryegrass after maize and this year’s maize also went into fresh ground. The new ley has already provided four cuts of silage and some late grass for buffer feeding.

“The workshop is fairly in depth, but the secret is to have good information in the first place. My DairyCo extension officer helped me prepare the figures and pull it all together, which took about two hours working together to do this. When you don’t have good computer records it would take considerably longer.”

Mr Harvey says going into the workshops with an open mind is vital. “The best thing about it was the excellent consultants and the quality of discussion. It was an excellent group of farmers prepared to be open about their figures and that made all the difference.”

The computer programs used in the workshops develop an appreciation of the relationship between production systems, costs structures and profit outcomes.

“In our group there were people with set ideas about where their business was going. But during the course they changed their ideas about how they were doing things and where they were going. ‘What if?’ has the power to do that,” says Mr Harvey.