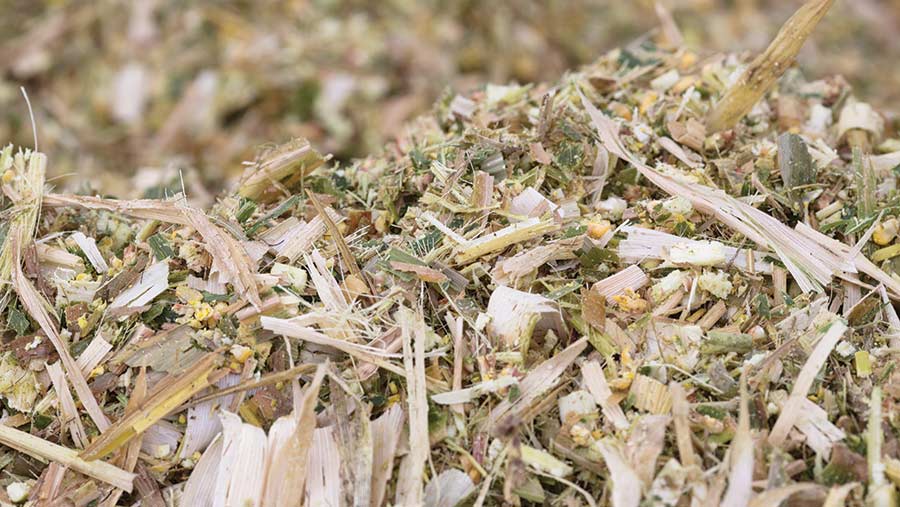 Mycotoxin risk is higher this winter for many farms that produced silage in wet and challenging harvest conditions last year, experts are warning.

Any farmer who is unsure of the level of mycotoxin challenge should test their clamp, advises Dr Davies, following the latest Alltech European mycotoxin survey, which showed higher risk of DON (deoxynivalenol) and the trichothecene mycotoxin T-2, as well as high levels of penicillium.

See also: How to reduce costly losses of big-bale silage

“Some maize was [cut] early last year but there was a lot of silage that was very late, after August weather messed up the maturation of the plant,” said Dr Davies. “Last year I saw a huge amount of dead maize and it is the dead material that is at higher risk of fungal infection.”

However, an early spring and ideal harvesting conditions at the start of the year means earlier grass silage cuts should be low risk.

“A lot of April and early May first cuts were made and second cuts at the end of May and the start of June then followed in ideal harvesting conditions,” said Dr Davies.

The heightened risk of mycotoxins in feed has been suggested by the latest Alltech 37+ European Mycotoxin summer harvest survey taken on cereal, maize and grass silage sampled in September and October.

Farms are being warned that higher summer precipitation led to fusarium-generated mycotoxins and penicillium.

He recommends testing for mycotoxins – including penicillium and aspergillus groups to inform any mycotoxin management strategies to reduce and prevent detrimental effects on animal performance.

Farms can start by having forage analysed for mycotoxins, which requires good samples for useful results, said Dr Davies.

“Variability across the clamp face is huge,” he explained. “It’s currently up for debate how best to sample clamps, but if you focus on high-risk areas such as the edges and the top of the clamp, this should reveal the issue if it is there as you only need small amounts of mycotoxins for it to become a problem.”