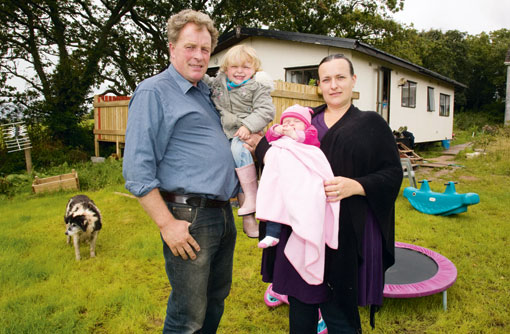 David Bolt’s family have milked dairy cows at Easter Ridge Farm, Cadeleigh, Devon, since 1962 – and he doesn’t want to be the one to pack it all in. But with a herd that’s been denuded by TB and milk prices below the cost of production, the future looks anything but bright.

“Farming is never easy, but until the mid-90s it was a good way of life, and my parents gradually built up to owning 160 acres,” he says. “In 1999 I went into partnership with them, and also ran a contracting business foraging, muckspreading and so on. But in 2000 our vet Dick Sibley said it wasn’t
foot-and-mouth we should be worried about, it was TB. And sure enough, soon after that we went down with it.”

As Mr Bolt’s parents stepped back from the day-to-day running of the business, he realised that he would have to choose between contracting and the home farm.

“We used to do a lot of muckspreading over the winter, which spread the workload, but with the introduction of Nitrate Vulnerable Zones (NVZs) that made it more difficult, so I gave it up about three years ago.”

At its peak, the farm milked 120 cows, but TB means that number has now fallen below 70. “Since 2001 the longest that we’ve been TB-free has been four-and-a-half months,” he says. “We’ve lost 225 cattle, and on one day 65 animals were shot. My worst day was when five in-calf dry cows were shot on the farm Ð seeing them lying on the ground with the calves struggling inside them was just soul destroying.”

Being under TB restriction so much also has a considerable impact on the day-to-day running of the business, he adds. “Your farm management just goes out of the window. We calve all year round, and used to sell our youngstock as stores. But since TB we’ve had to sell to approved finishing units at a much-reduced price, because we don’t have enough food to carry them all through the winter. As soon as we go clear for a while, we just have to empty the sheds ready for the next round. It plays havoc with your cashflow.”

With the farm being rather spread out, Mr Bolt had grazed his youngstock on the furthest fields. But he then discovered that was where the worst of the infected badger setts were. “We kept losing young and in-calf heifers, so we’ve got far too many old cows in the herd now.”

He has since moved the youngstock closer to home, to try and reduce the risk of infection. But with compensation paid at a flat rate, regardless of age, the business now can’t afford to replace in-calf heifers. “It’s a downward spiral Ð at less than 70 cows, I haven’t got enough to be milking efficiently, or enough money to buy new cows, or enough youngsters coming through. And so it goes on.”

Fortunately, at his most recent TB test, the herd went free. “It really felt terrific to go clear,” says Mr Bolt. “But you just keep waiting for the next one to go down. We’ve had two animals that tested clear, and just five weeks later were found to have lesions at the abattoir. Then you get no compensation whatsoever Ð just a bill for the transport.

“Over the years we’ve lost well over £200,000 because of TB, and it’s almost impossible to describe the feeling you get every time. I try not to think about it too much as I end up getting upset.”

And it’s not just Mr Bolt who is affected by the farm’s difficulties. It has a knock-on effect on the rest of his family. “I’ve got a wonderful wife and two beautiful young daughters. I work from 6am to 9pm, but do have a relief milker so I can take a couple of mornings off with my family Ð that is really important.”

He and his family live in a static caravan, with his parents next door in the farmhouse. “My mother used to milk all the time, but she won’t go near the yard now because she doesn’t want to get upset. We can’t make money out of 70 cows, so we are currently living on tax credits,” he adds. “I don’t have a quad bike Ð I have a push bike and two collies. Even without TB we’re losing 6p/litre Ð to say we’re living on the poverty line is an understatement.”

The decline in the farming industry in the area is clear to see. “When I was growing up every other farm was a dairy farm, and now there are only two in the parish.”

So why doesn’t he just give up and do something else? “If I didn’t have my family here I wouldn’t be doing it; I could sell up and move to a council house, but I want to bring my children up here on the farm. I know I would be better off selling the cows and buying a topper, but I don’t want to do that either Ð it feels wrong when there are people starving in the world.

“We haven’t got enough arable acres to turn it into an arable farm, or a big enough acreage to have a successful beef unit,” he adds. “And I hate sheep. Perhaps I’m a little stubborn, but I like dairy farming and I do still believe in the industry.”

As chairman of the Tiverton and Cullompton NFU branch, Mr Bolt was instrumental in organising the recent dairy farmers’ protest against milk price cuts in London. “I think the industry has got a very good future if the government takes heed of what we say.”

Better education is key to garnering more public support. “A large percentage of people don’t know or care where their food comes from,” says Mr Bolt. “But we’re coming to a time now when they’re going to have to care. Supermarkets only run with three to four days’ supply of food, and if they carry on treating the industry the way they are there won’t be an industry left.

“We need a lot less talk and more action from our politicians,” he adds. “There are some really bright youngsters out there who want to come into this industry, and it won’t take very much for them to be lost.

“Unfortunately, politicians only ever think short-term. But there’s going to be a lot of change over the next 20 years. Farming is a long-term business, and I would very much like to still be here in 10 years. But right now, it’s a very close-run thing. I’m not farming from one year to the next, I’m farming from one day to the next, and I’m sure there are plenty of other people out there who are doing the same.”

Although Mr Bolt welcomes proposals for a badger cull, he does not expect it to be rolled out until 2014-15, just before the next general election. “We all know there is a problem with badgers Ð it’s not their fault, but if it’s not sorted out I shan’t be in business. My income has dropped through the floor because of TB, but costs are going through the roof. It’s a pretty awful situation.

“People just don’t realise the financial and emotional impact it has Ð there have been times when I’ve just broken down and cried. I could borrow £150,000 to invest in new cows, but if they go down with TB I’ll be bankrupt. And I won’t do that to my family. My doctor says I should take pills for the stress; but the only happy pills I need are real action against TB and 6p/litre more for my milk.”

See our page on bovine TB

Watch dairy farmer David Bolt’s account of how his farm has been ruined by bovine TB.

With large numbers of cattle lost to the disease and the current milk price cuts, the farmer sees little hope for his and his family’s future in the dairy industry.