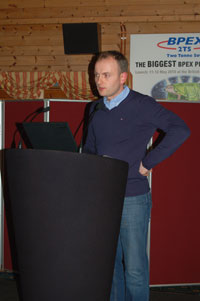 EID and such technology may be feared words in the UK beef and sheep sector, but Northern Ireland pig producer, Andrew McCrea, sees such technology as vital to his farm’s success.

Technology allows Mr McCrea to access up-to-the-minute farm data even when he’s not there with a network of five computers on farm and use of Personal Digital Assistants.

All staff on the 700 sow unit also have a PDA which Mr McCrea believes is vital. “The PDAs allow faster and more accurate data entry, it means they have access to sow history in their pocket and also assists with staff bonuses.”

He then produces a monthly management report which contains farrowing and feeding data as an example which is then compared against targets which determine whether individuals are entitled to a monthly bonus. “Each parameter is allocated a certain amount of money and when staff hit targets they get a bonus – but when they don’t hit it they don’t get it,” he said.

Mr McCrea has just started using EID technology as well. “The aim of this is to speed up data entry at farrowing serving and weaning and so far, so good,” he said.

He also uses a pig grading information system which allows pigs to be marketed more accurately. “Processors in Northern Ireland signed up to it upload pig weight from every producer on to a pig information grading system (PiGIS) and this allows me to access personal pig data such as p2 levels and tells me what percentage of pigs are fitting required parameters. It also allows me to compare with Northern Ireland averages.”

A slurry aerator is also a recent installation which Mr McCrea believes has justified initial costs by reducing mixing points and times which has resulted in no crusting, low maintenance and less smell from the tank.”