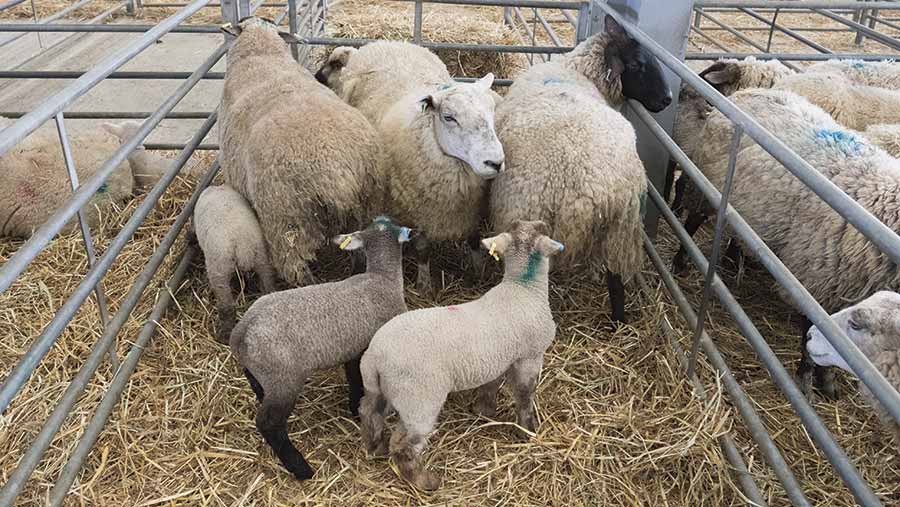 Strong, and at times record-breaking, hogg and ewe prices are yet to hit early sheep and lamb trade, with buyers desperate for spring to come.

Some ewes at certain saleyards are showing the signs of a long and challenging winter, although quality sheep remain available.

This left prices 52.15p/kg up on last year’s consistent trade, which fluctuated about 175p/kg (166-186p/kg) for five months before seeing a spring lift at the end of May.

Cull sheep meanwhile have skyrocketed £17 a head in Scotland in March, with averages up to £70, not far behind the Livestock Auctioneers Association average for England and Wales of £75 and £73 a head for the past two weeks.

Weather has cut numbers about 25% at Sedgemoor, where Tom Mellor of Greenslade Taylor Hunt says he would expect ewes with twins to be 10-15% dearer given the prime market.

“In two-to-three weeks’ time they might be a doddle to sell with more buyers in the markets but at the minute the cold is keeping people at home, there’s less selling and buying,” he told Farmers Weekly. “Current trade is very similar to last year.”

Market sentiment for ewes and lambs is still strong at Exeter but a drop in quality has put pressure on prices, as a long and challenging winter has left some ewes lacking condition.

Best cross-breds with twins are £190-£218 and singles are £91 a life, although thinner sheep showing the effects of a hard winter are pulling back trade by £5 on November values, according to Russell Steer of Kivells.

“Quality is back but those sheep in good condition with strong twins are easy to sell. Trade is being dampened by quality, but not market sentiment,” Mr Steer told Farmers Weekly.

On the prime lamb side he said Euro Quality, Craven Arms, were struggling to source enough 39-42kg lambs, with many being 42-50kg.

Craven Cattle Marts is now a month into ewe and lamb trade, with auctioneer Ted Ogden calling for spring sunshine and warmer weather to buoy prices, which, while decent, are only at last year’s levels.

“Generally, outfits are a nice trade and anything with strong lambs is selling well,” he told Farmers Weekly. “We are selling about 100-200 outfits each week and in the main season of April and May will see 300-500, so we aren’t at full season yet.”