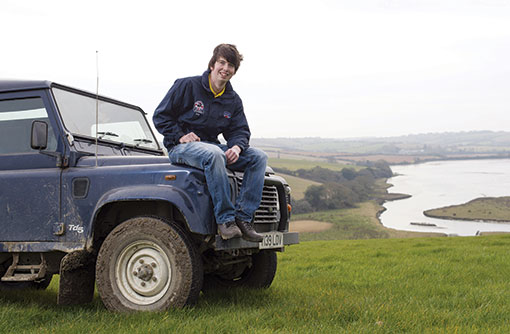 September flew by and October seems to have passed so fast it’s difficult to know where to begin. Late nights, dodgy weather and bracing ourselves for winter will do for starters.

All of the maize has been harvested and we completed it in two blocks. This allowed us to plant some new grass leys behind the first block, which was cut in good weather. Getting these in during the autumn is part of “profit” from growing early-maturing varieties. Having the extra grub to give the cows has also been beneficial, with a decent rise in yield and milk quality. We’re happy with the analysis of it too, especially as there’s a big pile of it.

This autumn has seen us try a one pass-style machine to try and establish a grazing ley. The rest of it was done in the conventional way. We ended up with only a small window to do the cultivations and rolling ended up being completed in one big nine hour stint starting during evening milking.

The second block was cut about three weeks later in less favourable conditions. With a late start and the furthest away fields to cut, Dad and I weren’t sure whether the contractors would finish. We should have had more faith as sure enough, later that evening the team at Barretts Contractors knocked on the door to say they had finished and would help us sheet down the pit. The last tyre went down at 2am, but thankfully maize 2013 was done for us.

With winter approaching, the sand kennels and cubicles have been topped up and raked about. Annoyingly the cows had other ideas and spent all the next day ruining our good work. Rather than leave it in the bed they thought that it was better placed in the scrap way and promptly hoofed it all out overnight. The next day the shed resembled something more like Newquay beach than a cow shed!

It’ll soon be time to bring the stock in and winter duties begin. I already hear gripes and moans about the clocks going back and stupid wet weather getting boots wet. It’s not all bad news though – shortest day soon and spring always comes back.