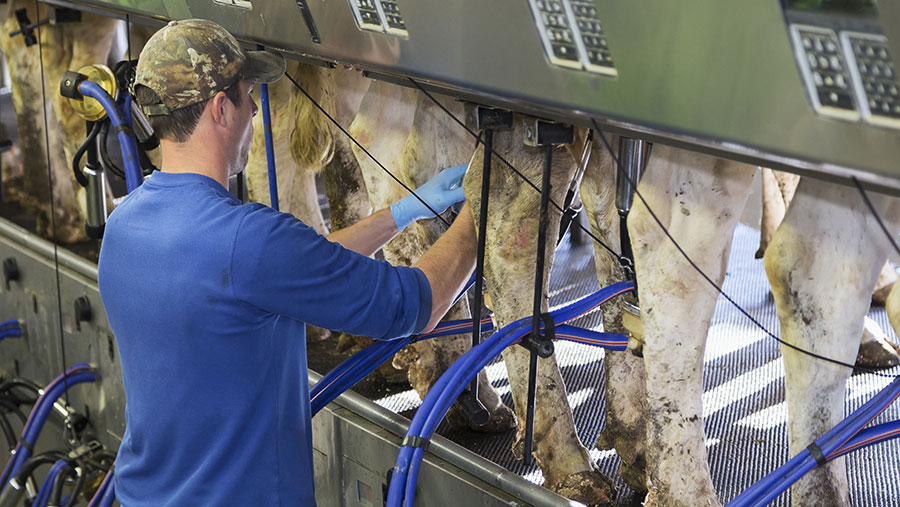 Weekly team meetings, the introduction of a ‘staff hub’ and quarterly meetings with an external staffing consultant have been part of a concerted effort to build a team spirit by Montrose dairy farmer, Gregor Colquhoun.

Over the past 10 years staff numbers have doubled at Dendoldrum as a result of the herd expanding from 200 to 700 cows.

As a result, Mr Colquhoun – who farms with his parents, Blair and Judy – has faced a raft of new management challenges.

“As we’ve expanded, we’ve got more and more staff so one of the biggest challenges I face is managing staff and getting them to work together and efficiently and communicate together and with me,” he explains.

See also: 4-step guide to recruit and retain staff on your dairy farm

Along with the family, the unit employs nine full-time staff, including seven Polish workers. Cows are milked through six robots or a herringbone parlour, three times a day and yield 11,000 litres at 3.85% fat and 3.15% protein.

About a year ago, Mr Colquhoun started working with Ian Lindsay from LKL and AgriStaff Consulting to help create a more structured approach to managing the team.

Mr Colquhoun explains: “I’m used to managing cows rather than people. It takes me out of my comfort zone, so I’ve used Ian to get me more comfortable and more confident.”

Mr Lindsay began by asking the team to carry out a staff motivation/satisfaction survey. This included questions such as: do you feel the farm owner communicates well with you?; and do you feel you are given enough training?

This initial survey highlighted communication between the team as one of the main areas for attention.

As a result, Mr Colquhoun has introduced a weekly 10-minute meeting on a Monday to discuss the work for the week ahead and any extra jobs that may need doing.

“Before, it was word of mouth and I used to presume they spoke to each other about what needed doing. I’d also maybe tell them on the day what needed doing so now I give them more warning,” he explains.

A ‘staff hub’ has been set up in a Portakabin. This acts as a venue for the weekly team meetings and quarterly meetings with Mr Lindsay, who trains the team on various topics and repeats the satisfaction survey. The senior team also meet with the vet and nutritionist here once a quarter.

Jobs and production results are posted on the wall, together with health and safety notices. All of the staff have been registered for DairyPro points to highlight the training they have received.

Another change has included the use of laminated recording sheets for lameness and bulling cows, which all of the team are encouraged to fill in. These are stuck up next to the clocking-in machine, which everyone has to walk pass regularly.

Mr Colquhoun believes this has resulted in more of the team picking up bulling cows and should result in improved pregnancy rates in the long-term.

He adds: “There’s always room for improvement. It’s a work in progress. It’s probably a happier environment I think and the satisfaction scores mostly tell you that…

“The team look forward to Ian coming up as it’s something different. We get an hour an a half with Ian and then I might get a Chinese takeaway – it’s the novelty and it builds a team atmosphere,” he says.