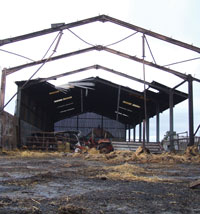 Farm manager Gavin Stainthorpe was knocked down by stampeding cattle when fire ripped through buildings at Sneaton Castle Farm, Yorkshire.

The situation was made more dangerous when strong winds carried showers of sparks on to livestock buildings endangering the animals inside.

Mr Stainthorpe tried to move 160 cattle and horses, but the cattle panicked and he was knocked to the ground and trampled.

He was later taken to hospital suffering from shock and breathing difficulties caused by smoke inhalation.

All of the 1300 bales were lost along with a tractor and other farm equipment. Two further tractors were badly damaged.

Initial reports from fire fighters suggested the fire could have been started by an electrical fault in a junction box just outside the barn which set fire to a small stack of bales. The flames then spread to the barn.

Fire fighters from five engines tackled the blaze at its peak. One crew was still on site damping down almost 24 hours later. 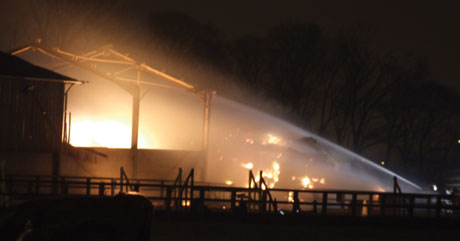