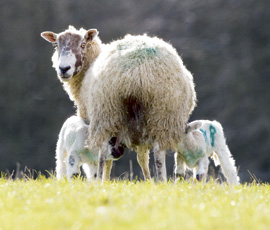 Farmers have been urged to do more to prevent the growing menace of livestock rustling.

Insurer NFU Mutual has seen a “massive increase” in the number of claims for the past 12 months.

Based on claims reported by its members, NFU Mutual has estimated more than 67,000 sheep were stolen in the UK during 2011 – and rustling cost UK farmers more than £6m in 2011.

Northern Ireland is currently the worst-affected region, accounting for more than 20% of livestock theft claims, followed by the North East, the North West and south-west England.

NFU Mutual had received 360 claims for livestock rustling in the region last year, compared with 264 in 2010.

Tim Price from NFU Mutual said: “In the past year we have seen a worrying increase in thefts in all livestock-rearing parts of the UK. It’s becoming a major concern, particularly for sheep farmers.

“In addition to sheep being stolen, we have also received claims for hundreds of stolen cattle and pigs and thousands of game birds.”

During the past decade, livestock rustling has been at historically low levels, while rural thieves concentrated on easy pickings – stealing quad bikes, tractors and expensive power tools from farms.

Now, however, high meat prices and improved security on farm vehicles appeared to be prompting a resurgence in livestock rustling, Mr Price said.

NFU Mutual sees a close correlation between the price of commodities and the level of theft.

“In recent years we have seen thefts of metal rocket when scrap prices have been high; thefts of diesel from farms increases in line with oil price increases and now the same thing appears to be happening with livestock,” said Mr Price.

Because of the sharp rise in rustlings, about 300 local offices are working closely with farmers and the police to tackle the problem.

“We’re also calling for rural dwellers to keep an eye on sheep in fields near their homes and report any suspicious activity to local farmers or the police,” said Mr Price.

NFU Mutual is advising farmers and butchers buying stock to check livestock records and ear tags carefully to make sure they are not buying stolen animals.

NFU Mutual believes the majority of stolen livestock goes straight into the food chain. There is also a significant risk that stolen livestock may be slaughtered, butchered or stored in unhygienic conditions.

Preventing rustling is not easy, because you can’t lock up livestock overnight or fit an immobiliser to them. However, there are a number of steps farmers can take to reduce the risk.

Ensure stock is clearly marked and records are up to date

When possible, graze sheep in fields away from roads