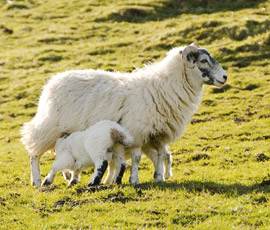 A rise in liver fluke cases and resistance to products is proving a headache for many farmers across the UK.

Scottish upland sheep and suckler cow producer Neil Gourlay, who farms at Moniaive, Dumfries, believes fluke is probably one of the biggest problems facing the livestock sector at the present time.

“Over the past few years we have seen the climate become considerably wetter, and this has led to a major increase in fluke infestation in cattle and sheep. Three or four years ago we used to dose the ewes for fluke once or maybe twice during the winter. It has got to the stage now where we have to treat the sheep around every four weeks throughout the winter,” says Mr Gourlay.

Cattle are also in much poorer condition coming into the sheds for the winter, forcing Mr Gourlay to treat them immediately at housing.

Triclabendazole resistance is a particular problem at the farm, due to the fact it was the product they used most, based on its efficacy against early immature fluke – the stage that can often cause death in sheep.

Three years ago, ewes were given their normal autumn pre-tupping dose for fluke, but within three weeks they discovered that one of their flocks was still infested with fluke.

“We couldn’t believe the sheep had become re-infested with fluke, having been treated only three weeks previously. What we then uncovered with the help of the SAC and local vets was we had resistance to triclabendazole. The more I looked into it, the more I discovered this was much more prevalent than we had been led to believe.

“It was very disconcerting to discover the product was not working, and to have to bear the associated costs. Because it kills the immature fluke, we had routinely used triclabendazole and I suspect that this overuse has resulted in the resistance problem,” he says.

Once Mr Gourlay had uncovered the problem, he worked with his vet and the SAC to develop a revised treatment regime. This involved rotating the use of other flukicide actives to help ensure they didn’t get further resistance and managing the flock to keep it as free of fluke as possible.

However, because triclabendazole is the only product that is effective against early immature fluke, it is a problem, explains Mr Gourlay. “We can’t take the sheep off the pasture, so you never get rid of the fluke.”

Talking to other livestock farmers in the region leads Mr Gourlay to think triclabendazole resistance is quite a widespread problem. He urges farmers without a resistance problem to review their treatment regime and not to overuse it, saving treatment for the times of year when new infections from the pasture are high.

“Having a rotation strategy and using triclabendazole at the right time as part of that is the way to ensure you don’t end up with the kind of resistance we have,” he says. “Because we now have this resistance we urgently need another solution for treating early immature fluke.”

So far, the only reported cases of flukicide resistance have been to triclabendazole, says Fiona MacGillivray, veterinary adviser with Merial Animal Health. “The trend towards wetter and warmer weather favours the fluke life cycle and as such we are seeing increased risk from this parasite.

“Cattle rarely suffer from acute fluke disease caused by the early immature stages of the parasite, whereas sheep are at much higher risk. As it is the same parasite that infects both cattle and sheep, in order to ensure farmers retain the ability to use triclabendazole on their farms they should certainly consider treating their cattle with an alternative flukicide to triclabendazole, to avoid overexposure to this active,” she says.