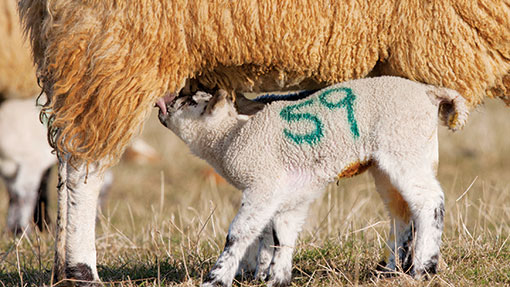 Coccidiosis can be a costly disease for sheep farmers, with lambs aged three to eight weeks being the most vulnerable, as well having implications on grass supply in the subsequent season.

That’s according to vet Joe Henry of Alnorthumbria Veterinary who says the cost and management implications from a coccidiosis outbreak in lambs will directly affect the bottom line.

Lambs aged three to eight weeks are most vulnerable from infection, with exposure to high oocyst numbers, particularly in combination with stress, leading to clinical and sub-clinical forms of the disease.

Diarrhoea (with or without blood), weight loss and death are seen, but diagnosing the disease is not simple. Gut damage is the main problem in clinical and sub-clinical cases, causing depressed weight gains.

“The bigger problem of slower finishing lambs can often be ignored,” says Mr Henry who adds that it can typically add a month to finishing depending on severity.

“They cost more to rear, and usually reach a lower end price, as traditionally the price per kilo drops as the season moves on. Anything that affects these growth rates, such as coccidiosis, is costing the business money,” he says.

But the knock-on effects from coccidiosis can carry over into the following season. “For example, there is less grass to flush the ewes on if lambs are retained for longer than planned,” he adds.

However, coccidiosis is a difficult disease to manage and requires tackling the disease in the environment.

Mr Henry says if no action is taken until clinical, signs such as scours are evident, then the likelihood of losing lambs increases, as well as the problem of growth setbacks.

In most cases, the environment is the main source of coccidiosis infection for young naive lambs, and managing this environmental oocyst challenge is a numbers game.

Older lambs multiply the coccidial oocysts which mean younger lambs face a bigger challenge; also oocysts are very tough surviving in soil from one lambing season to the next.

Mr Henry says coccidiosis levels should be considered on a field-by-field basis. “Certain, regularly used fields will have high levels of disease which can affect the following year’s lambs if not managed correctly.”

When lambs ingest just one infectious coccidiosis oocyst from the pasture, this has the potential to multiply and turn into 16m oocysts that are excreted back out on to the pasture.

To manage this multiplication and spread of coccidiosis, it is important to identify high-risk fields, says Mr Henry.

“Ensure that non-susceptible livestock are placed in these fields; not lambs at a high risk from coccidiosis, which tends to be seen from four to eight weeks of age.”

He advises farmers shouldn’t wait to see scouring and clinical signs of coccidiosis in their lambs.

“Be proactive in your approach and treat during the high risk period, but before overt symptoms occur. Bear in mind the history of the fields in question, and if there is an especially high disease risk,” he adds.

Mr Henry suggesting using products containing toltrazuril as an effective treatment for coccidiosis as it can also help in the long-term management of the disease.

“It reduces the spread of oocysts from infected lambs over a longer period of time, halting multiplication and build-up of oocysts on the pasture.”

But for an accurate diagnosis, Mr Henry stresses the importance of getting faecal samples analysed by the vet.

“Often farmers bring in samples thinking the lambs are suffering from a worm burden, and the testing reveals it is coccidiosis.

“Speciation of any oocysts seen during the faecal examination is essential to establish that pathogenic or ‘disease causing’ species of coccidiosis are present; it is also useful to know which pathogenic species are present.

“This can help build up an accurate picture of what farmers can expect on farm, and where, and inform the situation for the benefit of future batches of lambs.”