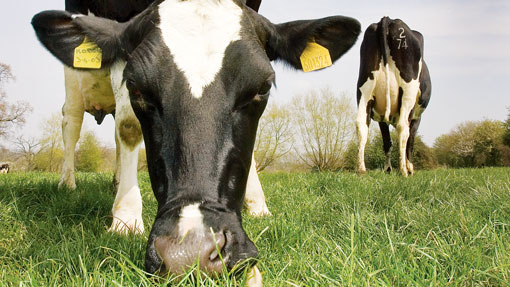 Breeding for fertility, boosting grassland performance and upping stocking rates has more than doubled profit per hectare at Ballyhaise College dairy in the Republic of Ireland.

By undertaking a targeted re-seed policy and adopting a complete change in mindset to grassland management, they have been able to boost grass productivity from 10tDM/ha to 13tDM/ha.

Raising stocking rates from two to three cows a hectare and ensuring cows calve in a compact spring block has then allowed more efficient conversion of grass into milk solids.

As part of a project supported by the Irish dairy levy, Ballyhaise aimed to assess whether a grass based, compact spring calving system was the most profitable and sustainable route for Irish dairy producers.

With the average Irish dairy farm being family run and managing 55-60 cows, such a low-cost system would fit with family living, while helping boost returns.

The farm’s enhanced performance figures show that regardless of system, taking bold steps to improve fertility and getting more from forage can improve efficiencies and profit margins.

“At the start of the project, the herd at Ballyhaise was producing moderate yields at low stocking rates. Fertility was a huge issue that was being masked by the 18-19 week calving pattern,” says Mr Patton.

To address performance and get more from grazed grass, the farm started focusing on improving pastures to help extend the grazing season. Weekly grass plate metering helped identify fields that would benefit from reseeding.

“There was a big range in growth between fields, with some yielding 16-17t and some 6t DM/ha/year,” explains Mr Patton. “We reseeded 15-20% of the farm in the first year using grass varieties that would grow at the shoulders of the year.”

Mr Patton says the main difference has been a change in attitude to spring grazing. “We used to wait for the ideal time to graze.

Now we put cows out on 10 February and manage the best we can. We will plan feed requirements and then buffer feed with baled silage or concentrates where necessary.”

High stocking rates means it is not possible to take a percentage of ground out for planned silaging.

Instead they take baled silage as a way to improve grass quality and help restore residuals. Baling also creates flexibility when buffer feeding is required.

Paddock size varies across the farm, with cows generally grazed for about three grazings a paddock. In good conditions, they will enter fields at 3,000kg DM/ha and graze down to 1,500kg DM/ha. Only in wet weather will cows be strip grazed.

“In wet conditions we do on and off grazing with cows let out to grass for three hours after milking,” says Mr Patton.

“We’ll then bring them back in to stand on concrete. We will buffer feed if we’re short on grass, but generally they just loaf. They’ll then go out for another three hours after second milking.”

Mr Patton says prior research has found cows can eat 90% of their total feed intake in two, three-hour sessions.

The herd may be grazed in such a way for 3-4 days with no effect on performance. However, experience has shown on and off grazing for longer can impact on body condition and yields.

“I have three rules; cows must be fed, ground shouldn’t be poached and we must reach grazing residuals. Ensuring cows are fed is a priority and can’t be compromised,” he says.

This is an area that has become particularly apparent since increasing stocking rates. “We are growing 13tDM/ha to carry three cows/ha, but we need to grow 15tDM/ha – we should be able to achieve that in the long-term as we further improve grassland.

Mr Patton says farmers need to be aware of grass requirements when considering upping cow numbers when quotas are abolished in 2015. “You need to make sure you’re growing enough grass or it’s too high a risk (in terms of cow condition and fertility),” he says.

“The harsh year in 2009 taught us you need to go in hard and early with extra feed if grass growth drops. Cows suffered with lost body condition and it showed us feeding the cow is number one.”

Research has also shown increasing stocking rates from 2 cows/ha to 4.5 cows/ha can expose grass based systems to added risk of feed deficit in the spring and autumn.

This can result in increased feed cost for every litre, placing systems on a knife edge should milk price drop. As a rule of thumb, on a system where a cow is producing 450kg milk solids a year the aim should be to produce 5tDM of grass/ha/cow.

At Ballyhaise, concentrate use a cow has increased over the years (see table) in response to increased cow numbers and awareness of grass production levels. The hope is by growing 15tDM/ha/year it will be possible to drop concentrate use to 400kg a cow a year.

To improve fertility and breed a cow that can use grass as effectively as possible, the unit has also tackled fertility head on. In the first year, they made the shift to a 12-week breeding period, but as a result experienced empty rates of 36%.

“It was a huge lesson,” says Mr Patton. “We tackled the problem by culling out animals that were not in-calf. It was a controversial and expensive move, but not doing it would have only prolonged the problem.”

In 2005 they lost half the herd because of infertility. The high level of replacement heifers calving-in also meant they experienced a loss in production.

“It is a difficult concept to sell to farmers. But we took a short-term hit to ensure the long-term sustainability of the system,” explains Mr Patton. “Fertility is key to the success of any system, regardless of yield.”

“We’re now getting more performance from a smaller cow which is helping profit/ha – mostly due to the lower maintenance requirements and the fact we can stock heavier,” explains Mr Patton.

He believes fertility makes or breaks any dairy system. Since undertaking the system overhaul, replacement costs have reduced and compact calving has enabled maximum use of grass at the key grass growing periods. They have also reached the stage where they can sell heifers, which is bringing an added income of E35,000 a year.

“It’s been a long, hard road and it’s taken us six years to see significant progress,” says Mr Patton. “Although we’re perceived to be low input, low output, the reality is our output per hectare is double the national average with less feed inputs.”