Once-a-day milking may be a relatively new concept, but according to research conducted in New Zealand it can be more profitable than traditional twice-a-day (TAD) milking regimes.

Speaking at last week’s inaugural OAD milking conference in Hamilton, New Zealand, Peter Gatley, general manager of genetics for Livestock Improvement Company (LIC), said the popularity of OAD has been growing over the last few years after a trial undertaken by Dexcel in Taranaki.

With more than 350 New Zealand units having moved to OAD, LIC and Dexcel conducted a study of the financial accounts of 22 farmers across the country. “This confirmed that in many cases once-a-day can be more profitable than twice-a-day milking.”

While farmers moved for a variety of reasons, there are clear benefits for both cows and people, but any system has to be profitable and sustainable, said Mr Gatley. “As one farmer at the conference said, ‘I’m out to make money, not necessarily milk. I want profit and a lifestyle’.”


On average milk solids reduced by 5.6% and farm working expenses fell by 25.5% once the switch to OAD had been made, explained report authors Ryan Anderle of FarmWise and Dawn Dalley of Dexcel.

“For once-a-day to be efficient stocking rate must be optimised and somatic cell counts controlled, particularly in autumn. On average, once a herd has moved to once-a-day milking profit improved by NZ$43,500. And the fall in milk solids a cow was largely offset by the increase in stocking rate allowed by once-a-day.”

And, with cows lasting longer in the herd as a result of improved animal health, body condition score and fertility, cattle sales increased on average by 33.5%. “Cull cows were heavier and farms had more replacements they could sell,” said the researchers. 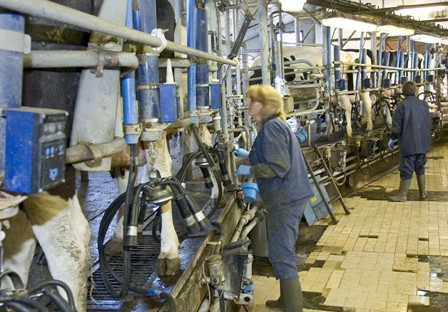 On top of that, OAD milked cows also suffer from reduced lameness and higher reproductive performance than their TAD milked counterparts.

Other research revealed at the conference included results of the latest survey on OAD milking, recording the experiences of 208 farmers. Farmers believed cows were far healthier, with the biggest benefits being in fertility and reproductive performance. These respondents also mirrored the financial study results, with reduced expenditure more than offsetting decreased production, leading to higher profits.

But while New Zealand experience may suggest there are profits to be had from OAD, Irish research indicates it may not be as clear cut. Teagasc researcher Bernadette O’Brian says in a trial which aimed to fill a 468,000 litre quota, OAD milking on a high nutrition system resulted in E4200 less profit than TAD milking.

“With twice-a-day, 76 cows were needed to fill the quota, but with once-a-day a further 18 cows were needed, resulting in increased costs. Once-a-day lead to a higher milk price, due to improved composition, but labour costs were largely similar, as these were one man units where few savings could be made on staffing. Larger New Zealand herds may well be able to cut labour costs as their staffing would be higher initially and they have no quota to worry about,” she adds.